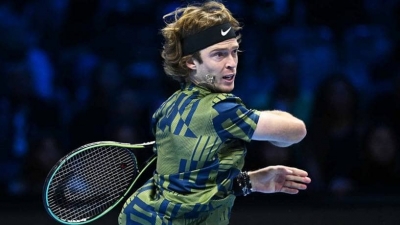 ATP Finals: Rublev gets the better of Medvedev in Red Group

Andrey Rublev brushed off a string of missed opportunities and got the better of his frustration to earn a dramatic victory against Daniil Medvedev in the ATP Finals here on Monday.

Turin (Italy): Andrey Rublev brushed off a string of missed opportunities and got the better of his frustration to earn a dramatic victory against Daniil Medvedev in the ATP Finals here on Monday.

In a thrilling clash in Red Group, Rublev recovered from squandering seven set points in the first set as he shook off his disappointment to earn a statement 6-7(7), 6-3, 7-6(7) victory on his fifth match point.

The 25-year-old Rublev was at his heavy-hitting best against the fourth seed in his opening Red Group match. He struck 25 winners across the second and third sets, opening up Medvedev’s defence in the fast indoor conditions with his flat and precise groundstrokes before outlasting Medvedev in an epic 37-shot rally to finally seal victory on his fifth match point in the third-set tie-break.

“I was thinking about the US Open, because when we played in the quarterfinals in 2020, I think I was 5/1 in a tie-break, also something like 6/2, but I was leading something similar in a tie-break,” Rublev said after the match.

“But when I lost that set, I couldn’t play anymore, and I was thinking it cannot happen the same [again], I have to change something. I have to keep playing, because if I win one set, even if I lose in three sets, it’s still good because here you have a group. So you have to fight for every point, every game, and I was able to win,” Rublev was quoted as saying in a report in the ATP Tour website.

“The final tie-break, the rallies that we had there were crazy. The last rally, we had I don’t know, 30 shots. I was cramping a bit already, but I was thinking ‘One more, one more. You have to keep playing. For sure he felt the same, so just keep playing if you have the chance, just go for it’. In the end, I was able to win,” Rublev said.

Rublev dropped to the floor in delight following his two-hour, 31-minute win, before he jumped up and waved to the vocal crowd. With his victory, Rublev has improved to 2-4 in his ATP head-to-head series against Medvedev.