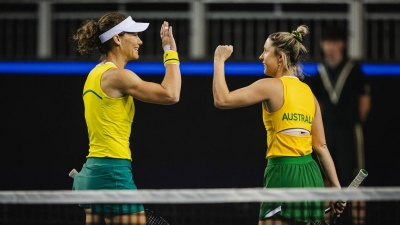 Australia stormed into the championship match at the Billie Jean King Cup Finals for the 19th time in their history, with Storm Sanders notching singles and doubles wins over home team Britain in a semifinal tie that could not have been closer.

Glasgow (Scotland): Australia stormed into the championship match at the Billie Jean King Cup Finals for the 19th time in their history, with Storm Sanders notching singles and doubles wins over home team Britain in a semifinal tie that could not have been closer.

It came down to the decisive doubles match, where Sanders returned and paired with Samantha Stosur to eke out a whisker-thin 7-6(1), 6-7(5), [10-6] victory over Brits Alicia Barnett and Olivia Nicholls.

Australia will now face either Switzerland or the Czech Republic in Sunday’s championship tie. The Swiss and the Czechs play the second semifinal tie, later on Saturday.

The Aussies, who were Billie Jean King Cup runners-up as recently as 2019, are seeking their first championship since 1974, when they won their seventh title in an 11-year span.

In the opening match of the day, Sanders continued her impressive singles performance throughout the week. The 28-year-old is ranked inside the Top 10 in doubles but No.237 in singles, and yet, Sanders has gone 3-0 in singles play in Glasgow thus far.

Forays into the net and excellent passes gave left-handed Sanders the first set. In the second set, Sanders took complete control in the tiebreak, taking four of the first five points with winners.

Sanders earned five match points with a backhand winner for 6-1, and she converted her third match point with another strong backhand. Sanders finished the clash having saved four of the five break points she faced.

However, 98th-ranked Dart put Great Britain back in contention. World No.33 Tomljanovic, a three-time Grand Slam quarter-finalist in the last two years, had beaten Dart in their two previous meetings, but Dart powered to the upset win in 1 hour and 49 minutes.

Dart saw an early break and a set point at 5-4 slip away as Tomljanovic’s gritty court coverage pulled her into the first-set tiebreak. Dart, though, maintained her aggressive stances in the breaker, and a forehand crosscourt winner gave her three more set points at 6-3.

Dart forced a long error from Tomljanovic on her first set point to grind out the one-set lead after 68 minutes, and the Brit cruised through the second set after that. Dart finished the match with 25 winners, more than double Tomljanovic’s 12.

An intense doubles match to decide the finalist saw each set go the distance before the Aussie squad prevailed after 92 minutes of play.