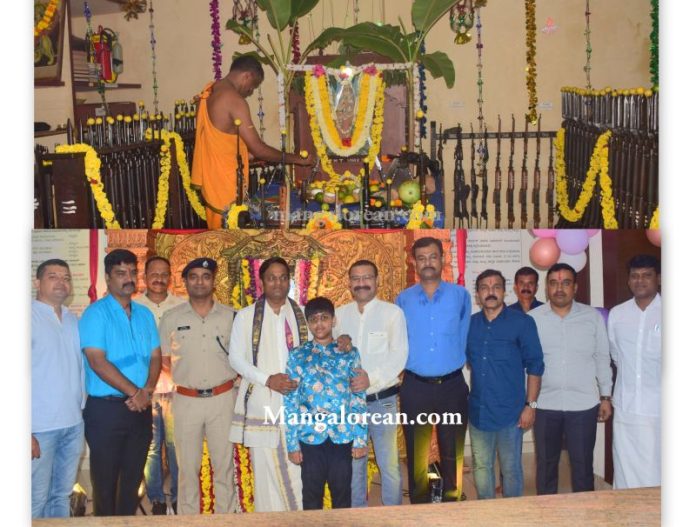 Mangaluru: Ayudha Puja was observed and celebrated by Mangaluru Police Commissionerate as part of the Navratri festival at the Police HQ Office and Armoury Department here on Tuesday, 4 October 2022. On the auspicious occasion of Ayudha Pooja, police officials offered puja to the rifles and other armaments and vehicles. On this day, vehicles were cleaned and decorated, tools and implements were cleaned and set in a particular place- and decorated with flowers and prayers were offered for the safety of the humans using them. 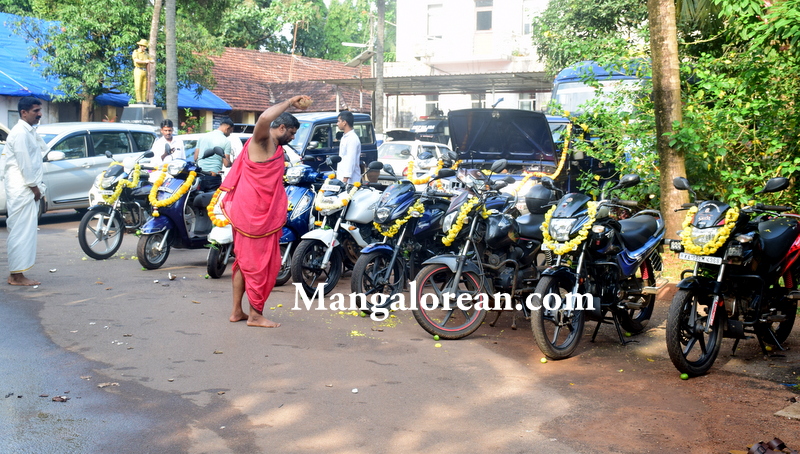 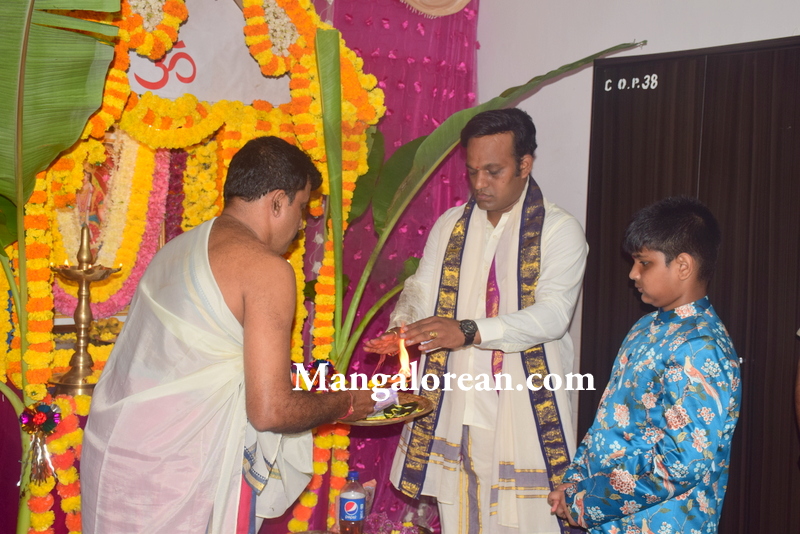 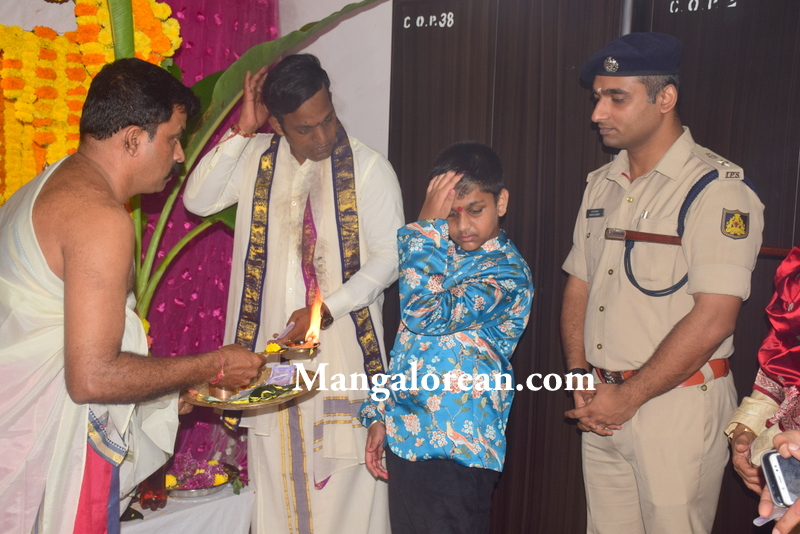 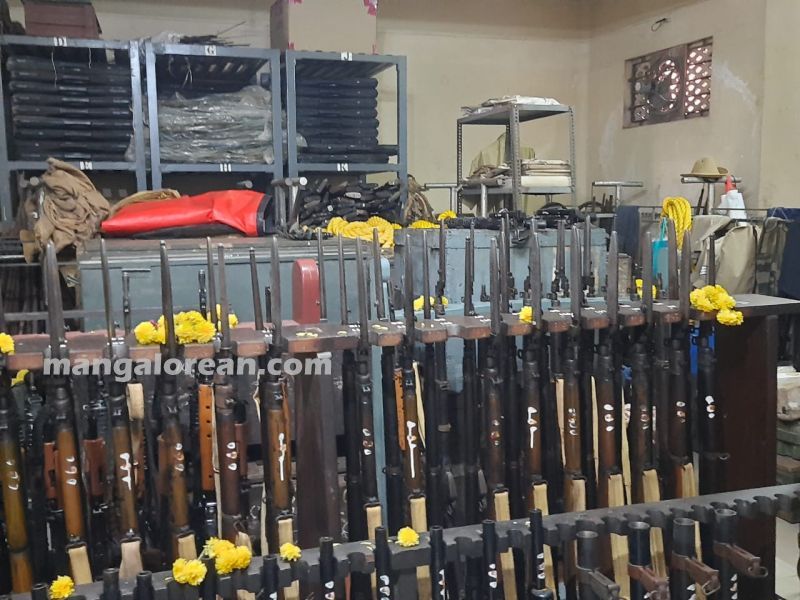 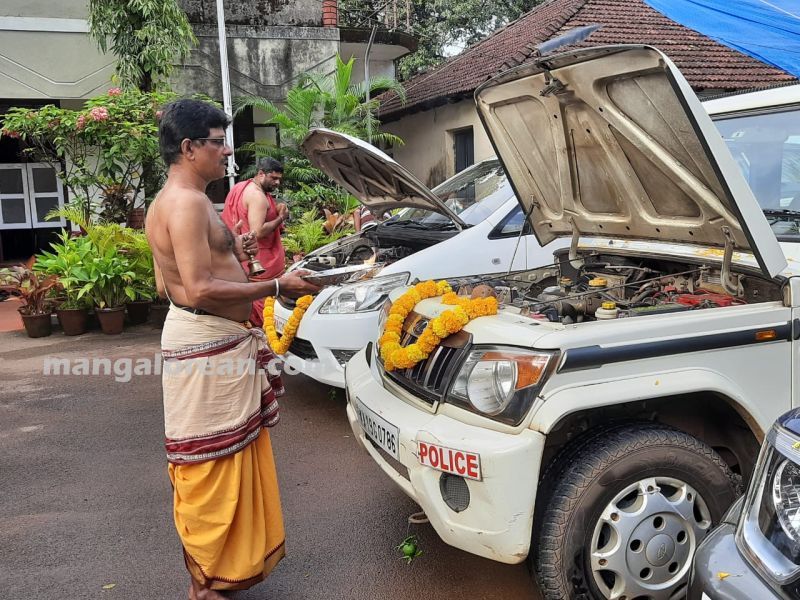 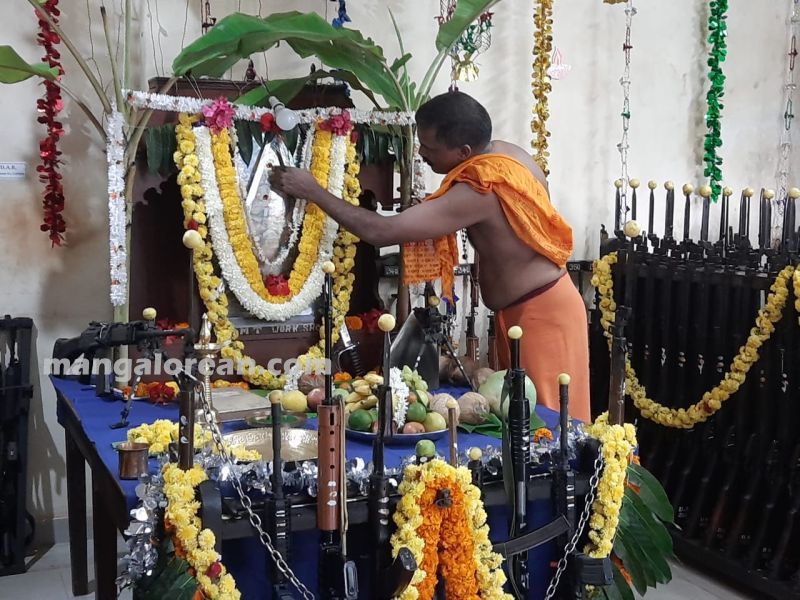 Police Commissioner N Shashi Kumar, DK Superintendent of Police Sonawane Rishikesh Bhagawan IPS, DCP Anshu Kumar; DCP Dinesh Kumar, among others who joined in the puja and celebrations extended wishes to police officials and people on the occasion of Dasara and stated that the Vijayadashami festival symbolised the victory of good over evil.

Apart from the weapons, police vehicles looked clean and gleaming, decorated with flowers. The peace and prosperity in the coastal districts made the police officials beaming with happiness. Along with the IGP, Police Commissioner and SP, other police personnel took part in the Puja. The Puja was performed to the Vehicles, with Arati, Ash Gourd and the Coconut- and to the weapons by ARSI Balakrishna Bhat. Two other outsourced priests also joined in the puja ceremony. 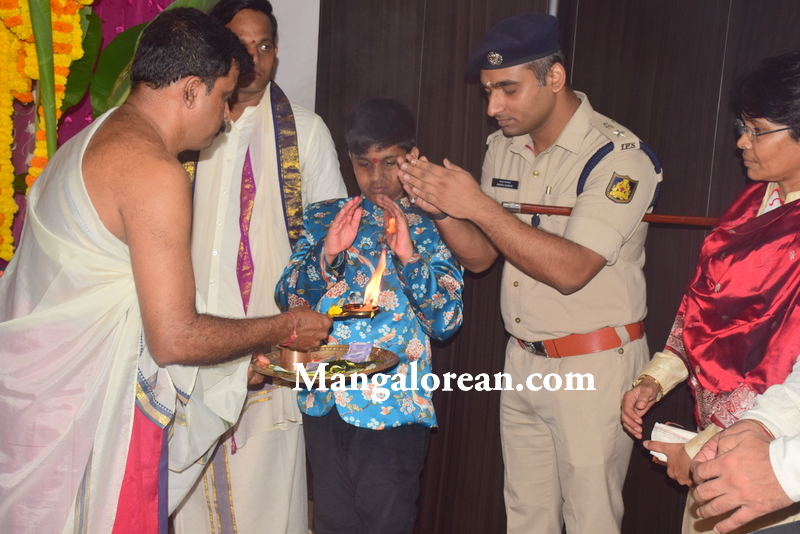 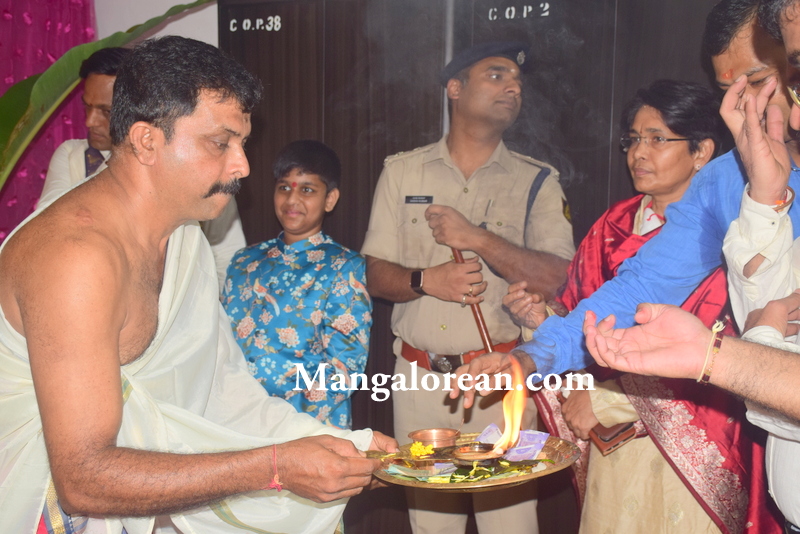 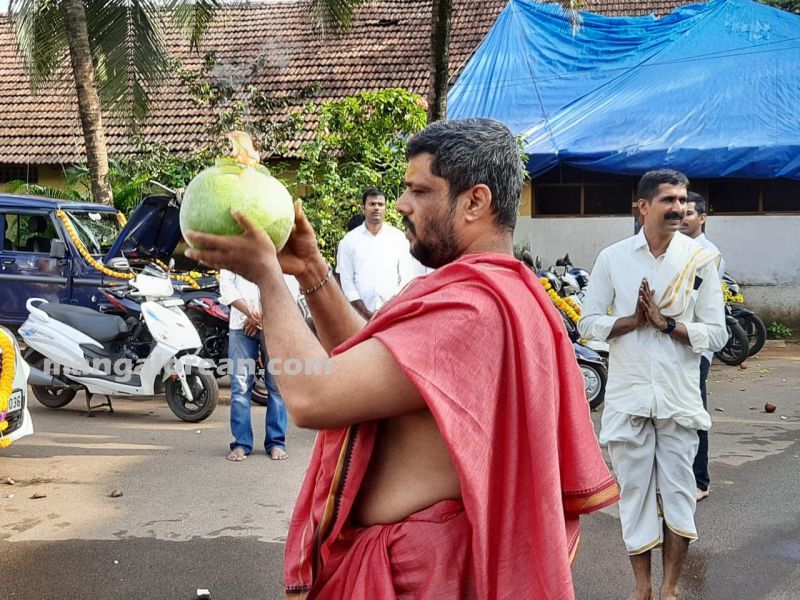 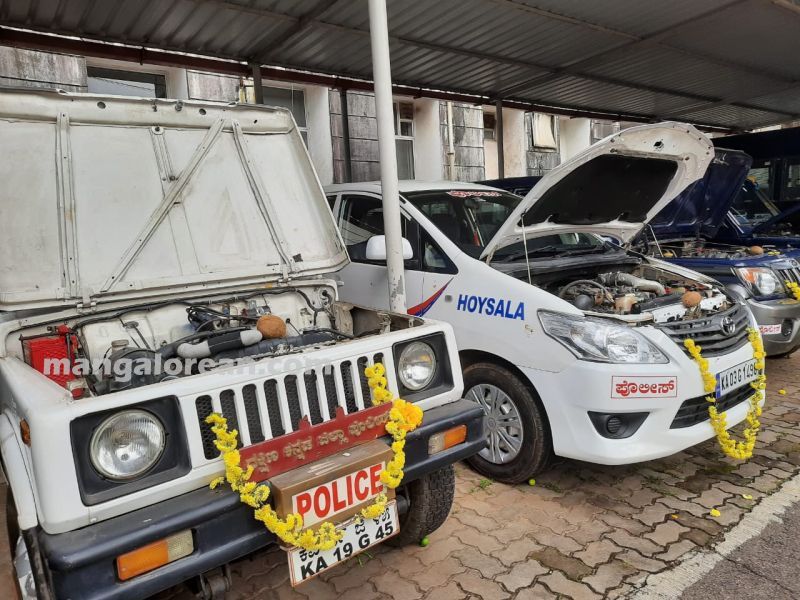 Ayudha Puja is an integral part of the Navratri festival. The tools and all implements of vocation were first cleaned. All the tools, machines, vehicles and other devices had been painted or well-polished after which they were smeared with turmeric paste, sandalwood paste (in the form of a tilak (insignia or mark) and Kumkum (vermillion). Ayudha Puja is celebrated to mark the ninth day of Navratri. Devotees mark this day on the calendar as the day of the Ayudha Puja or Astra Puja. This is an integral part of the Dasara Festival. The police department performed Ayudha Puja to worship all the implements used by them for law enforcement from their armoury to vehicles. 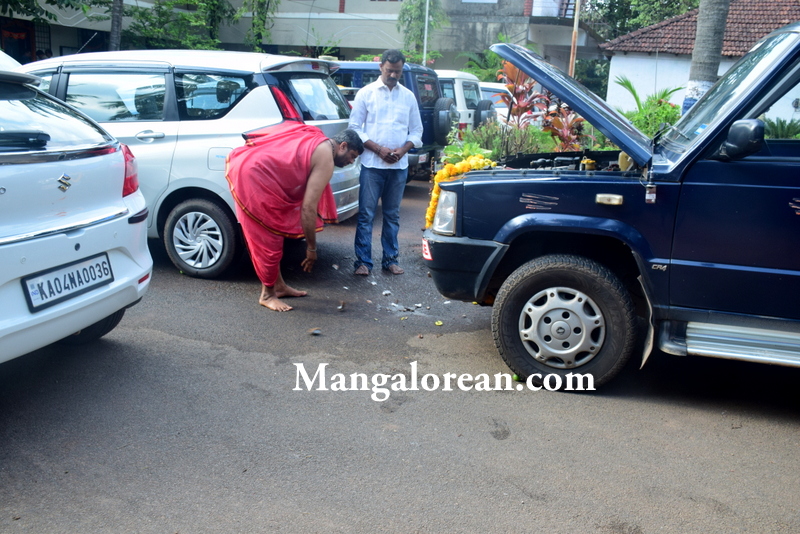 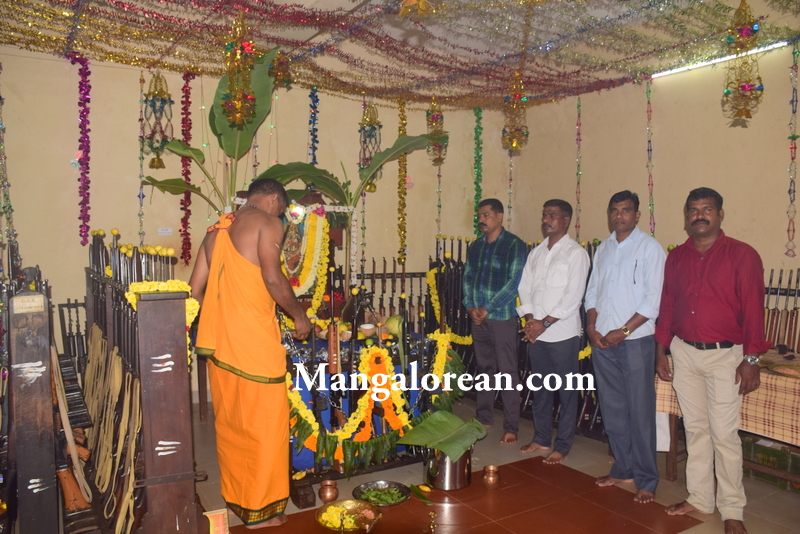 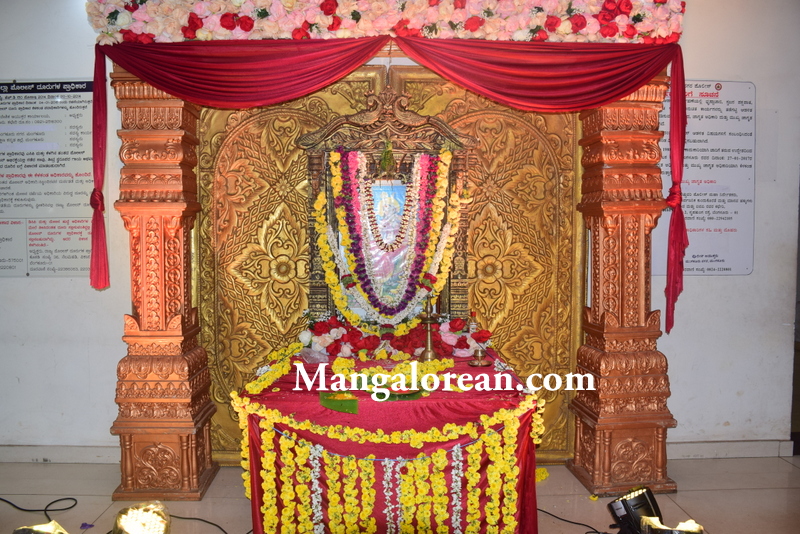 The police also performed Astra Puja to worship all the implements used by them for law enforcement from their armoury to vehicles. They also cleaned and painted their vehicles, tools, and implements in a particular place and decorated them with flowers and prayed for the safety of the humans using them. The Police Vehicles were decorated with vermilion garlands at the police headquarters. 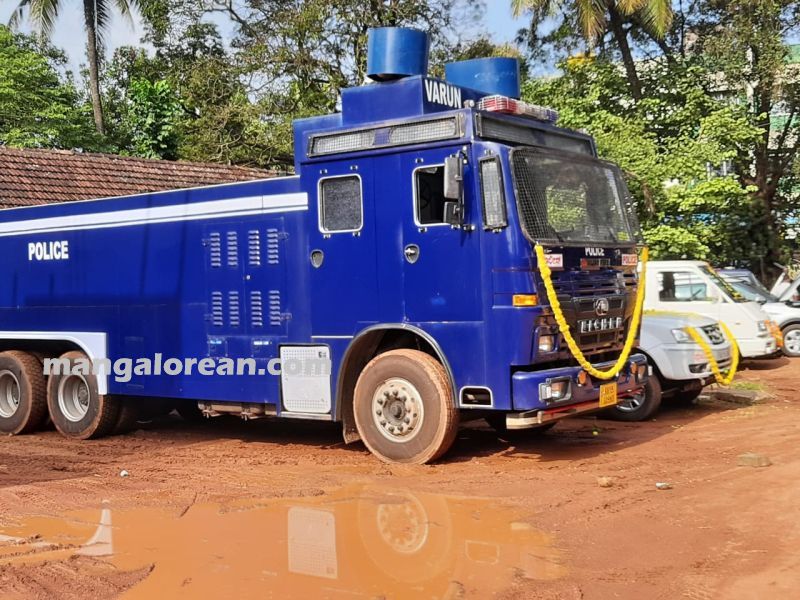 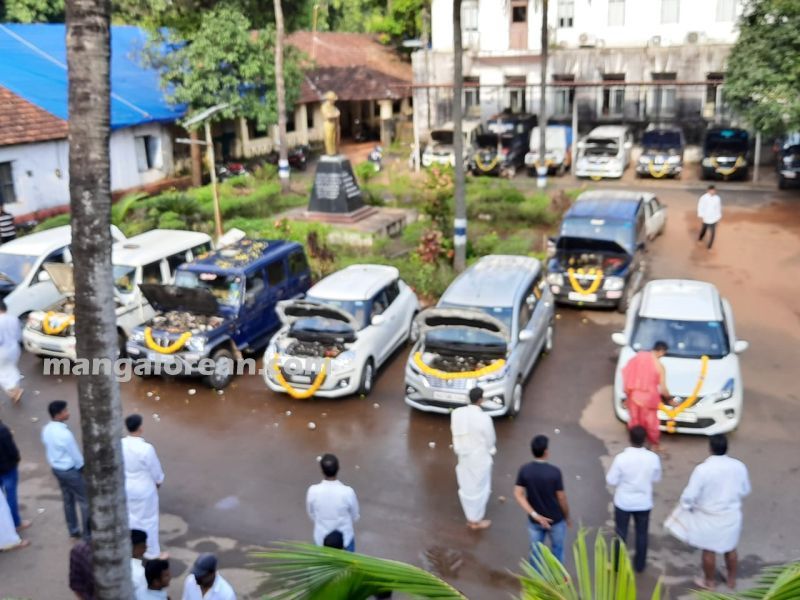 The Ayudha Puja is a worship of whatever implements one may use in one’s livelihood. On a preceding evening, it is traditional to place these implements on a podium, offering them to the deities. If one can make a conscious effort to see the divine in the tools and objects one uses each day, it will help one to see one’s work as an offering to God. It will also help one to maintain constant remembrance of the Divine. In India, it is customary for one to prostrate the tools one will use before starting one’s work each day; this is an expression of gratitude to God for helping one to fulfil one’s duties. 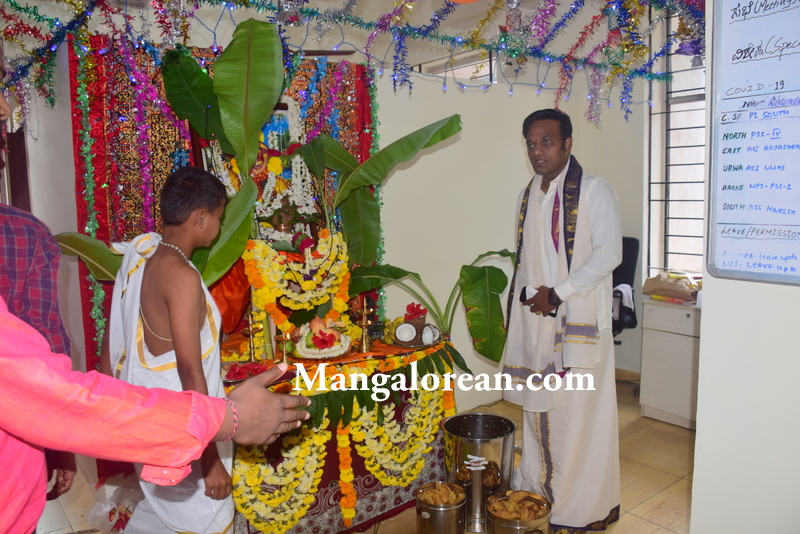 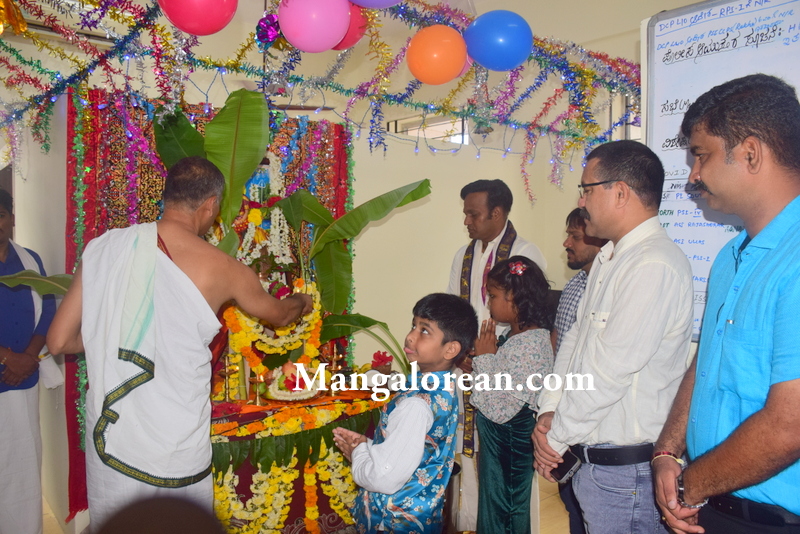 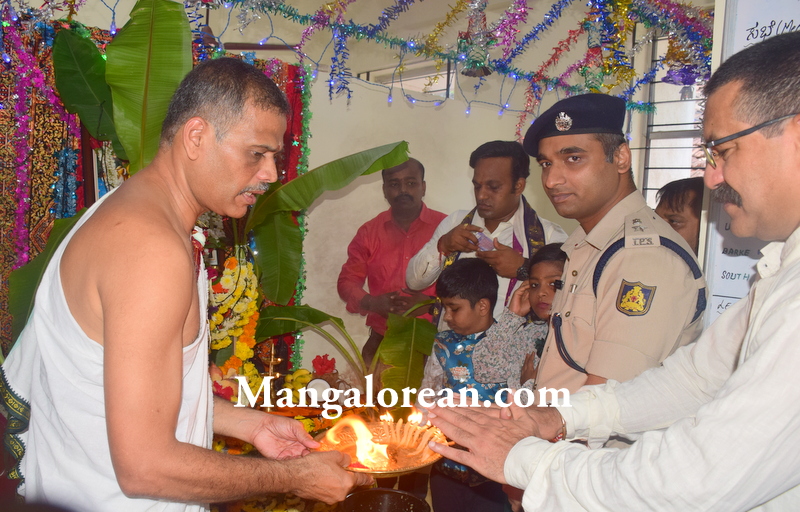 The history behind Ayudha Puja also denotes that after the slaying of Mahishasura and other demons by Chamundeswari, there was no more use for her weapons. So the weapons were kept aside and worshipped. This Ayudha Puja has been celebrated since ancient times. The importance of Ayudha Puja on this occasion is also attributed to the fact that on Vijayadashami day, Arjuna took back his weapons which he had hidden in a Vani tree in order to lead a life in disguise for the promised period of exile. It is believed that one who begins or renovates his learning to work on the Vijayadashami day will secure grand success as Arjuna did in the Kurukshetra war. 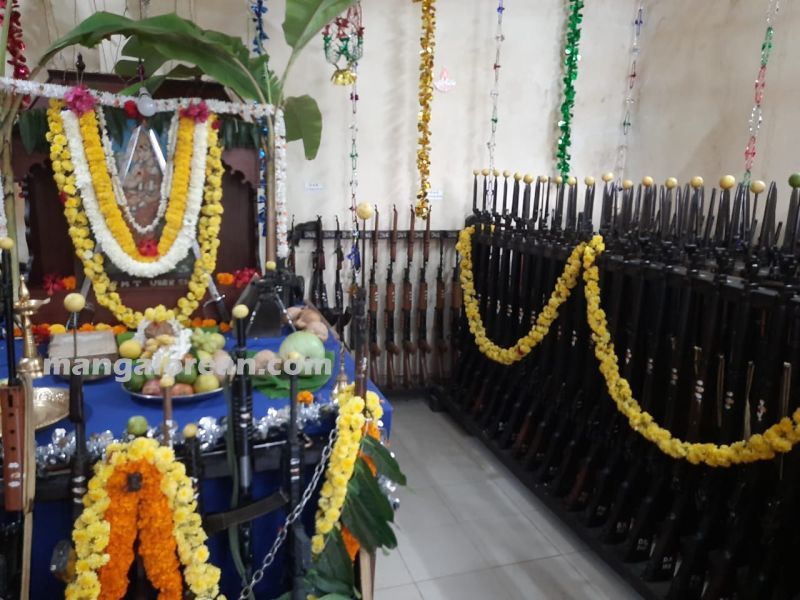 On Ayudha Puja, Hindus keep the tools and other equipment that are used for their livelihood for Puja. They will not touch the tools and implements on this day. It will be taken out only the next morning with renewed vigour after blessings from the Goddess. People perform special Pujas at home by elderly people. Visiting temples dedicated to Hindu goddesses is an important part of Ayudha Puja. 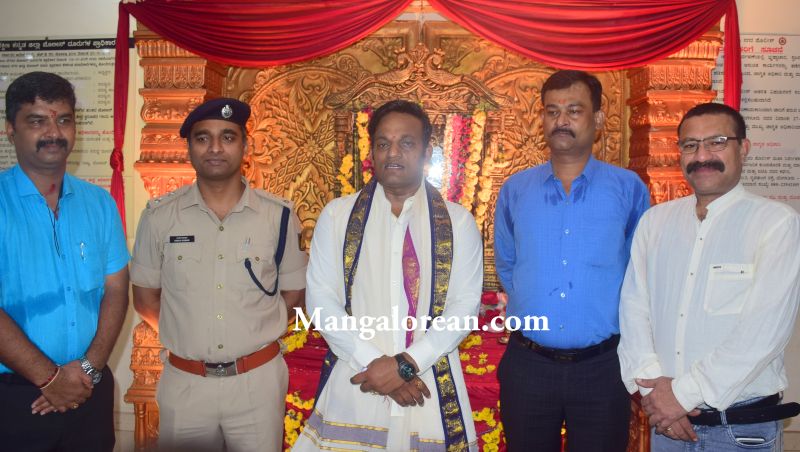