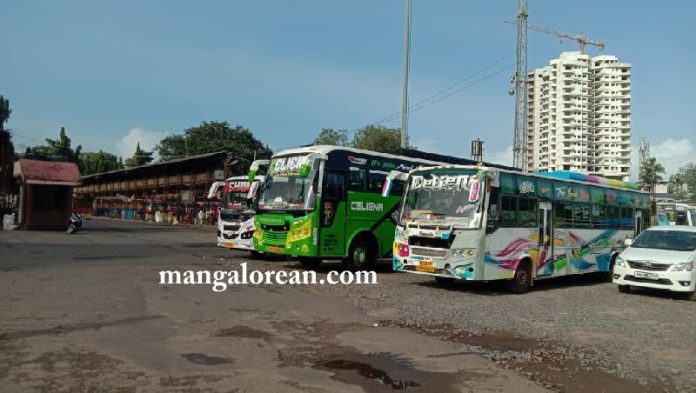 Mangaluru: “Bale right Poi?”- That’s right! And once again after nearly two months of private and service bus services were stopped due to lockdown, commuters will hear “Bale Right Poi” yelled by bus conductors, as partial services of service and city buses resumed today, 1 July 2021 as promised by the Bus Owners Unions. Many buses didn’t even start today, since they were parked for so long with no maintenance done. As of now out of 300 plus city buses that operate in the City, only about 75 buses are put into service today, while the rest will be put into service this coming Monday or in a week depending on the situation and customer patronage. As few city and service buses started to run today, many had to ply with just a couple of passengers, and in many cases, it was only the driver and conductor in the bus? 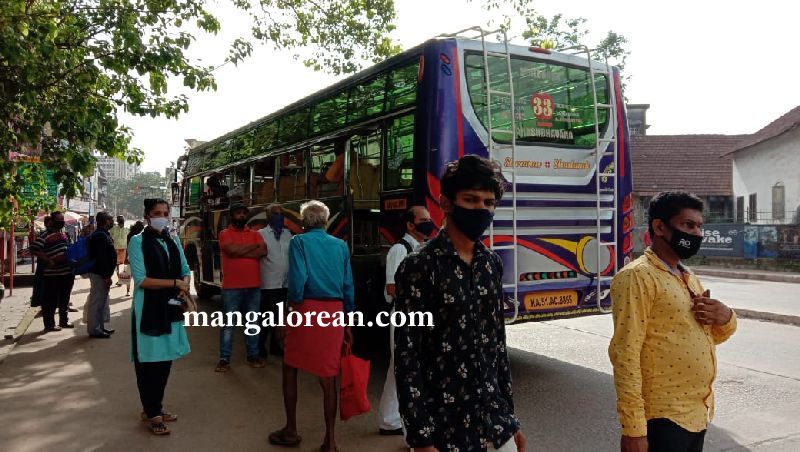 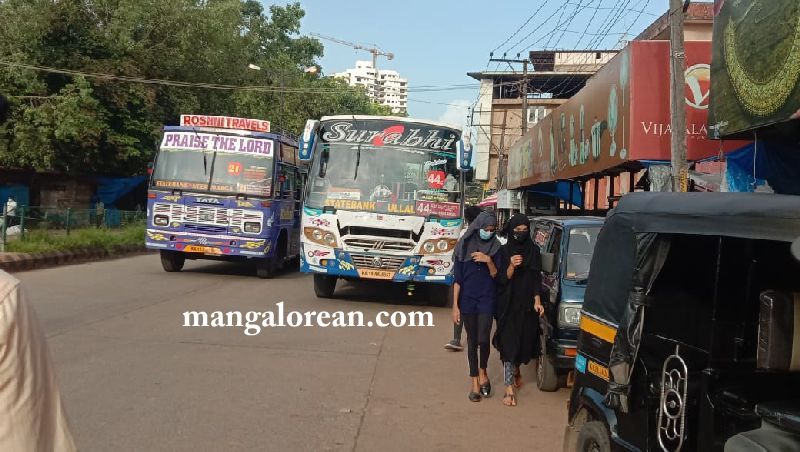 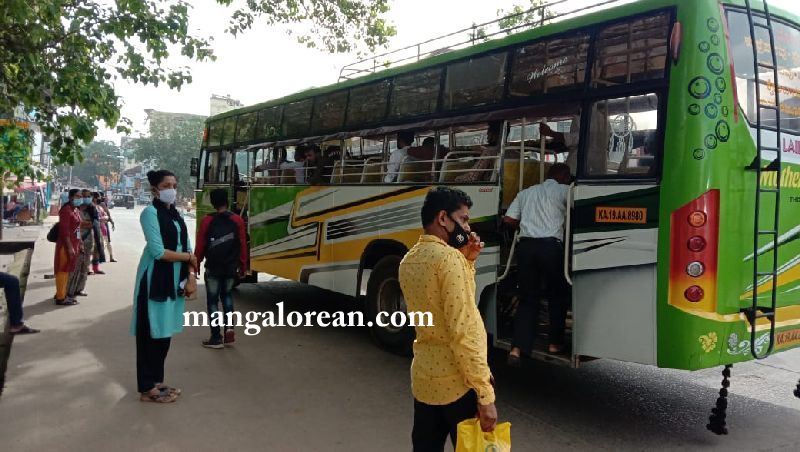 Dakshina Kannada Bus Owners’ Association, the umbrella organisation of private city buses, resumed services in a skeletal manner from July 1. Association President Dilraj Alva speaking to Team Mangalorean about confusion regarding hours of operation, said that If they are allowed to operate only up to 2 p.m., not many operators would be ready to deploy buses. However, services might become normal from July 5 when the Karnataka government is expected to relax the norms, he said adding operators were getting bus permits that had been surrendered to the transport department released one by one. “We are still upset with the government for not obliging us to waive the taxes or reduce it. With the rise in diesel prices and fewer passengers, it is very hard to manage the operation of bus services. We have only increased the earlier minimum fare of Rs 10 to Rs 12, and thereafter the price increases as per the kilometre travel. Hoping that we will get a positive and helpful reply from the government and District Administration so that we can serve the public without any hassles or hardship to them,” added Alva. 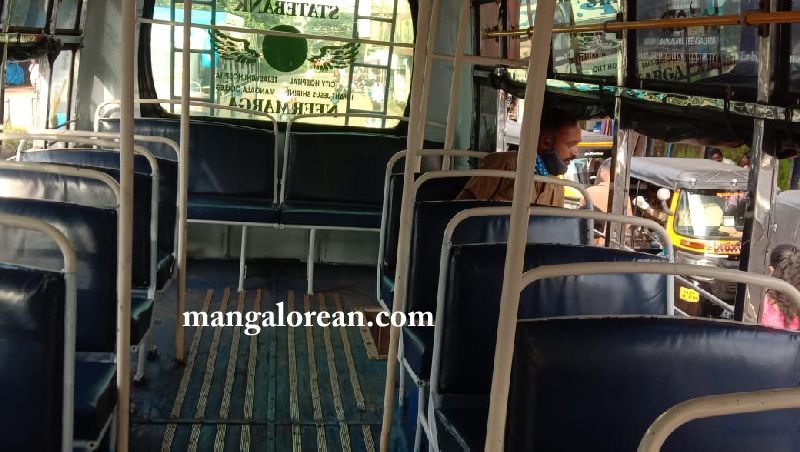 NO PASSENGERS, EXCEPT THE BUS CONDUCTOR?

Canara Bus Owners’ Association President K. Rajavarma Ballal justified the revised fares saying fares were last revised when diesel was sold at Rs 64 a litre. With diesel prices now crossing Rs 91 plus a litre, an increase in operational cost was inevitable. Plus, they have to comply with the condition of 50% occupancy. They would also have to pay enhanced minimum wages to the crew once the government notifies the new policy, which is expected soon. An operator has to pay Rs 1,000 in toll fees alone for a round trip between Kundapura and Mangaluru, he said.

With the new price revision, the fare between Mangaluru and Manipal will become Rs 100. The fare between Mangaluru and Udupi will be Rs 95 on express buses. Operators have increased fares by 15% from June 1 following last year’s COVID-19 lockdown. The Mangaluru-Manipal fare was hiked from Rs 67 to Rs 85. The minimum fare on city buses was increased from Rs 10 to Rs 12. The operators had sought the district administration’s nod to collect enhanced fares for two reasons: increase in diesel price and limit on the number of passengers to 50% of sanctioned capacity in keeping with COVID-19 appropriate behaviour. Dakshina Kannada Deputy Commissioner K.V. Rajendra said the revised fares were temporary till restrictions on capacity were lifted or the regional transport authority met to consider operators’ demand for revision in fares, whichever was earlier. 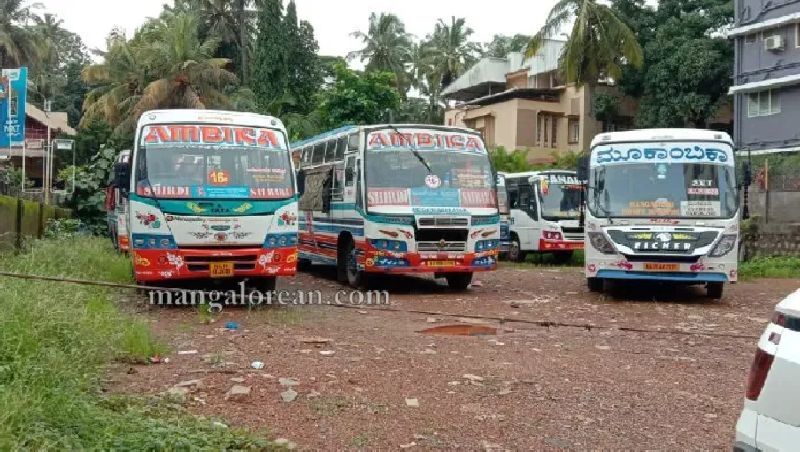 Few Buses Have Not Yet Resumed Services 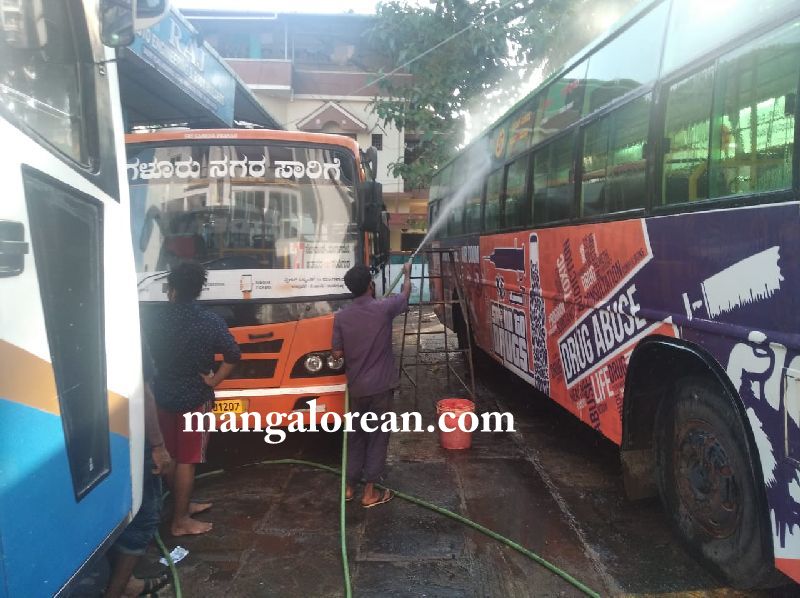 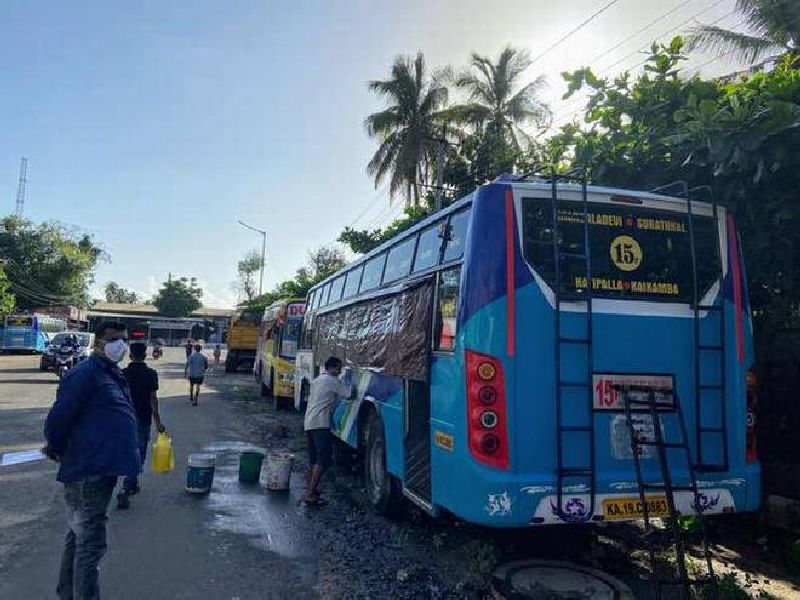 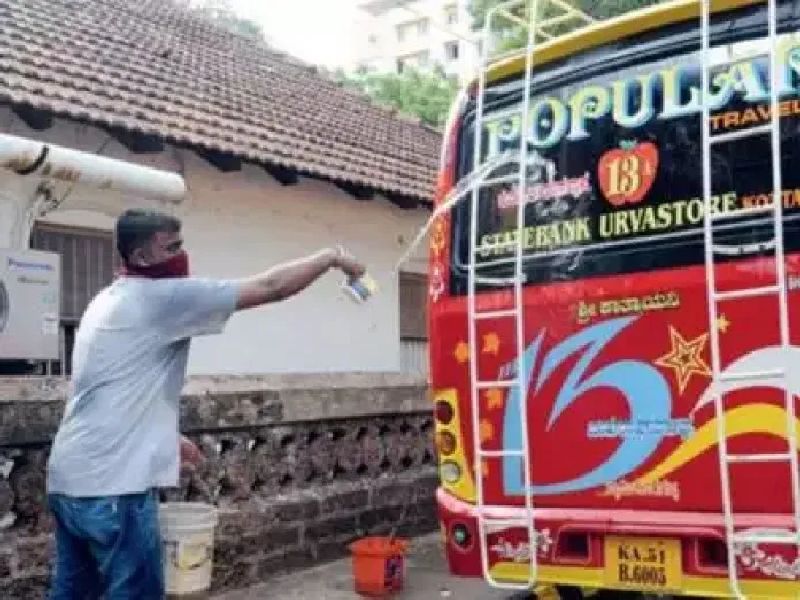 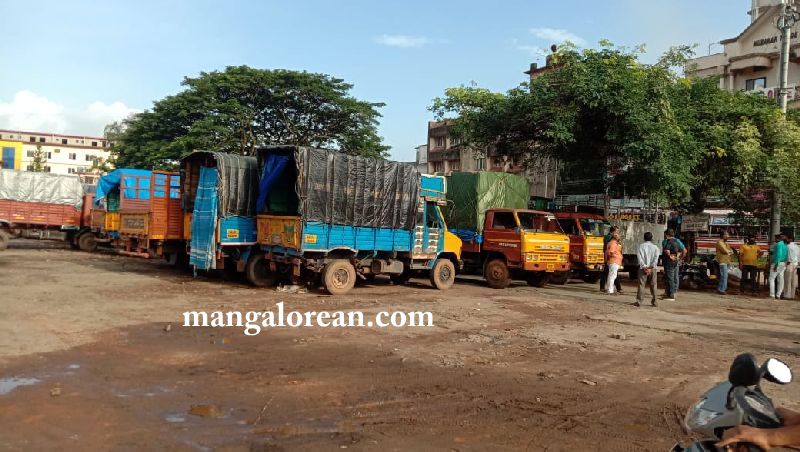 The Mangaluru City Traffic Police in consultation with the district administration and the Mangaluru City Corporation has decided to shift the private city bus stand to the State Bank Service bus terminal when operators resume services on Thursday. Hitherto, they were operating from the road adjacent to the terminal Space near Rao & Rao Circle where goods vans and contract carriage buses were being parked and had been earmarked for city buses as their starting point. Hitherto, the road between Hamilton Circle and Rao & Rao Circle was being used as the starting point for city buses. 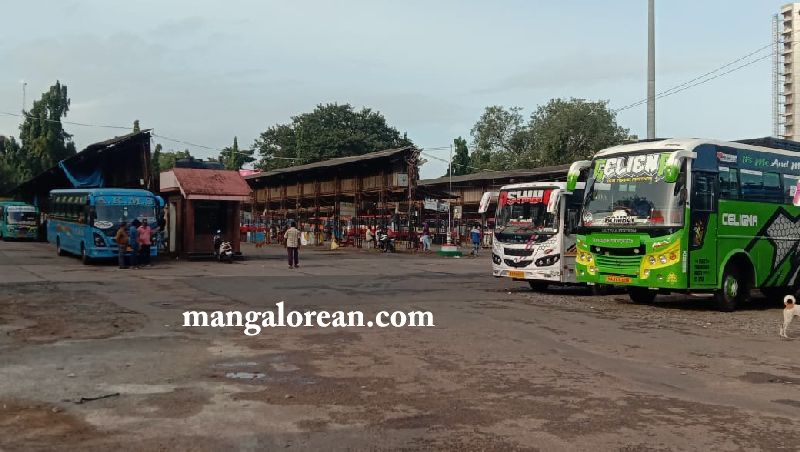 Assistant Commissioner of Police (Traffic) M.A. Nataraj told the media that the district administration has given in-principle approval for the change on a trial basis. The move is to facilitate making Maidan Road surrounding the central business district one-way from Clock Tower to Clock Tower in a clockwise direction and to ensure uninterrupted movement of vehicles. Nataraj said that not more than 10-15 city buses will be parked at the existing facility at a time to drop and pick up passengers as buses leave one after the other within about five minutes. The same number of buses can be accommodated inside the State Bank terminal at the identified space. Buses will enter the terminal from Rao & Rao Circle and exit from the usual exit point. 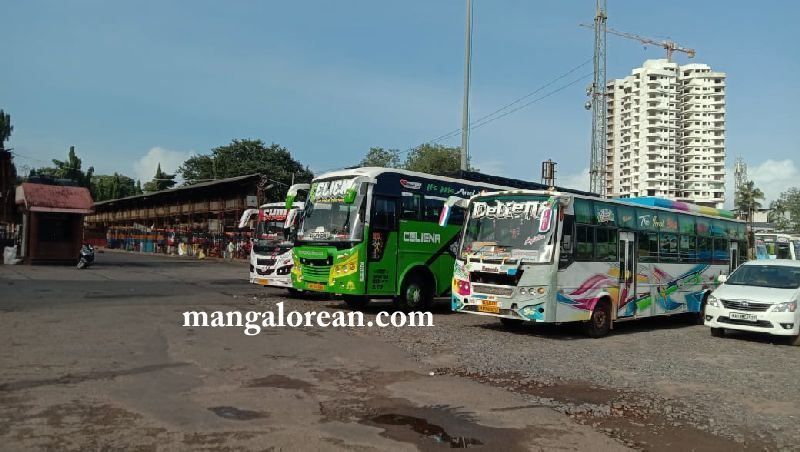 The police have also told service and long-distance express bus operators not to park their buses beyond 30 minutes at the terminal. Some long-distance buses having buffer time between arrival and departure are parked inside the terminal for long hours, while some even undertake minor servicing/repairs. This will be avoided in the coming days, Nataraj said. He also said that the move will help people interchange between city and service buses and avoid walking a distance for the purpose. 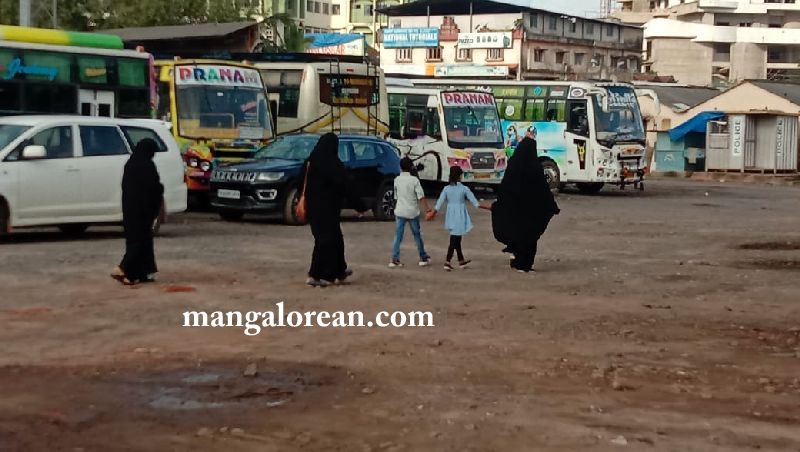 While some city bus operators were apprehensive of the development, Dakshina Kannada Bus Owners Association president Dilraj Alva said that the association supported this trial operation hoping for a positive outcome. Mayor Premanand Shetty, who inspected the spot on Wednesday, has promised to provide amenities, including concrete/bitumen flooring and street lights, once the system stabilizes. For the present, crushed stone powder has been spread over the road surface after levelling land, he said.

But this morning there was slight confusion between the Bus Owners and the Tempo owners, on the decision taken by the District Administration and City Traffic Police, however, with proper negotiation, the issue has been solved, and city buses will start from the service bus stand near State Bank.