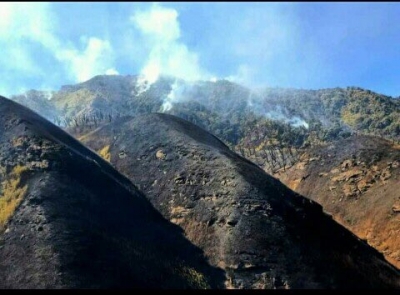 Defence spokesman Lt. Col P. Khongsai said that in the ongoing effort to douse the wildfire in the Dzukou valley on Nagaland-Manipur border, Spear Corps (of Army) is working hand in hand with various central and state governments organisations and tackling the problem in a synchronised manner.

“The Indian Army and Assam Rifles troopers are providing all possible assistance to the NDRF teams in terms of accommodation, tentage and logistics resources so that they can execute their tasks to their full efficiency. The Indian Army is also providing its aviation base for launch of Bambi bucket operations and coordinating ground support, air traffic control, air space management as well as other logistics support to the IAF, thereby augmenting the air-effort,” he said.

He added that the senior Army officials also had a meeting with the state administration for better synergy in the ongoing efforts.

“Indian Army has displayed true jointmanship in coordinating and synchronizing efforts of all agencies involved in dousing the wildfire,” the Defence spokesman said.

Nagaland State Disaster Management Authority’s Officer on Special Duty (OSD), Johnny Ruangmei said the wildfire is reasonably controlled and it was expected to tame the raze fully within the next 24 hours.

“The heavy gusty winds have affected the efforts to control the fire. Over 300 volunteers accompanied by the personnel of various departments and organisations were battling against the raging fire,” Ruangmei told IANS over phone from Kohima.

He said the Army, IAF, Assam Rifles state police, state and National Disaster Response Force (NDRF), Forest Department, volunteers of Southern Angami Youth Organisation (SAYO), accompanied by the local people and the NGOs, have jointly undertaken the massive endeavours including making fire lines in the Valley to break off the link between the blaze and the forest.

IAF spokesperson Wing Commander Ratnakar Singh said following a requisition by Nagaland, the Eastern Air Command in Shillong had initially deployed a Mi-17V5 helicopter to check the wildfire but assessing the situation, the IAF had deployed three more helicopters equipped with Bambi bucket.

Singh said that a C-130J Hercules aircraft of the IAF airlifted ninr tonnes load for fighting the fire including 48 NDRF personnel from Guwahati to Dimapur.

Manipur Chief Minister N. Biren Singh, who had conducted an aerial survey to take stock of the wildfire that has caused huge damage since it broke out on Tuesday, tweeted that the wildfire that broke out at Dzukou valley has spread quite extensively and caused serious damage on this part of mountain range.

“The fire has already crossed Mount Iso, the highest peak of Manipur. If the wind direction is going to the southern side, there is a high possibility of entering in the thickest forest called Koziirii in Manipur. Need help,” Nagaland Governor R. N. Ravi, who also visited the fire affected areas last week, urged the state government to immediately frame appropriate SOPs including Satellite Based Real Time Early Warning System to prevent recurrence of such a disaster.

The Dzukou valley, 30 km from Kohima, also is a sanctuary for the endangered Blyth’s tragopan – Nagaland’s State Bird – and other species of birds and animals.

The iconic valley, situated at an altitude of 2,452 metres above the sea level, is a popular tourist spot and also famous for its seasonal flowers and biodiversity. Often caught in a boundary dispute between Manipur and Nagaland, it also has been prone to wildfires.

Members of the SAYO, which run an adventure-based conservation programme, tackled such fires in many cases earlier. In 2006, the wildfire affected a 20-km stretch of the southern part of Dzukou valley.