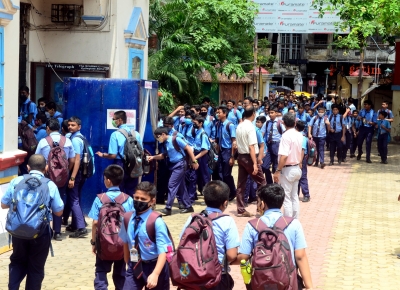 Kolkata: As per latest figures of the West Bengal tribal development department, the number of tribal students receiving post-matriculation scholarships under a scheme jointly funded by the Union and state government has declined sharply over a period of three year.

As per records of the said department, during the financial year 2017-18, the number of tribal students receiving this post- matriculation scholarship was 79,030. However, in the financial year 2020-21, the latest available figures on this count, the same number declined by 62 per cent to 30,050.

As per rules, students from tribal families with annual family income up to Rs 2.40 lakh is entitled for this post-matriculation scholarship to pursue their studies beyond the secondary education level.

West Bengal tribal development minister, Bulu Chik Baraik said that this matter will be looked into and also said that no fact-finding order has been given to identify the real reasons behind the decline in the number of tribal students opting for this scholarship.

However, a senior official of the department said that unofficial inputs received from a number of voluntary organisations shows that during the last three years there had been a trend among tribal students in the state to get engaged in any kind of work to earn livelihood instead of opting for the post-matriculation scholarship.

However, tribal rights activist and former CPI-M Lok Sabha member, Pulin Bihari Baske feels that there are other reasons why this particular scholarship has become interactive for the tribal students.

“First there is no timely disbursal of scholarship money and delay often becomes as high as six months. Secondly, a number of hostels scheduled for the tribal students are closed and those which are still functioning are under precarious conditions,” he said.