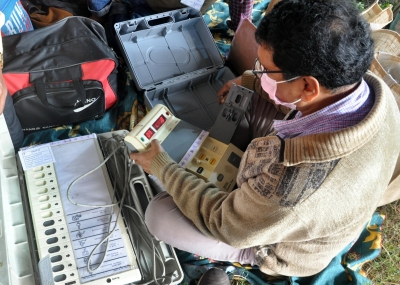 Even as the state prepares for assembly elections due in the first half of 2023, the voter data “scam” exploded this week with the opposition Congress party accusing the ruling BJP of accessing Bengaluru voters’ data through an NGO in the garb of voter awareness.

Bengaluru has nearly 80 lakh voters spread across 28 assembly constituencies, and winning these seats can help any party immeasurably in the electoral battle for the 224 member legislative assembly.

The issue came to the fore after the Congress on Thursday claimed that an NGO Chilume Educational Cultural and Development Trust and other related entities had fraudulently collected voters’ data in several assembly constituencies across the state capital.

The Congress also alleged that after collecting the information posing as Booth Level Officers (BLOs) appointed by the city civic authority BBMP, the NGO staff uploaded it onto an app belonging to one of these NGOs.

“Bommai should be arrested. He should resign as he has no moral right to continue as he is at the helm of affairs. This kind of conspiracy, theft by the CM himself never happened in the history of Karnataka,” Siddaramaiah said.

The chief minister has hit back at the Congress and said the accusations will land at its own doorstep.

“The Siddaramaiah-led Congress government in 2017 had illegally entrusted Chilume Trust with the task of revising electoral rolls and also permitted appointment of booth-level officers in some places,” Bommai said.

Meanwhile, as per Election Commission officials, around 6.7 lakh names have been deleted from the city’s electoral rolls even as nearly three lakh new names were added to it. This has led to allegations of large-scale deletion of voters in constituencies that elected Congress candidates in the previous elections.

However chief minister Bommai ruled out such a possibility while pointing out that nearly 46,000 voters had been deleted from a BJP-ruled constituency as opposed to around 15,000 deletions from the voter list of a Congress-represented constituency.

Launching a counterattack, N.R. Ramesh, BJP Bengaluru South Unit President, accused the Congress leaders of large-scale inclusion of names of minorities from neighbouring states in the voters lists. According to him, this has been done to ensure win in Bengaluru civic polls and assembly elections.

“The Congress has added 1.50 lakh duplicate votes in 27 assembly constituencies of Bengaluru,” Ramesh said, adding that he had also lodged a complaint in this regard with the authorities concerned.

For now, the promoters of the NGO remain to be traced, even as two employees have been arrested so far. The Election Commission has instituted a probe into the matter.

As Karnataka prepares for assembly elections over the next few months, the voter data controversy adds yet another dimension to the no-holds barred rivalry between the ruling BJP and the opposition Congress party.