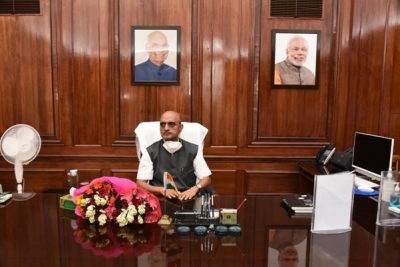 New Delhi:  Rajya Sabha MP from Maharashtra Bhagwat Kishanrao Karad took charge as Minister of State in the Ministry of Finance on Thursday.

Karad succeeds Anurag Thakur, who has been made the Minister for Information and Broadcasting.

He takes charge as the Minister of State of the Finance Ministry at a crucial stage as the economy is struggling amid the second wave of Covid.

Last month Finance Minister Nirmala Sitharaman and the then MoS Thakur had announced a slew of new measures to support businesses and the healthcare system. However, more steps have been sought by industry stakeholders and it is expected that the ministry may come up with more announcements in times to come.

A doctor by profession, 64-year-old Karad is a first-time member of the Rajya Sabha. Active in public service, he has served as Mayor of Aurangabad Municipal Corporation and also as Chairman of Marathwada Legal Development Corporation.