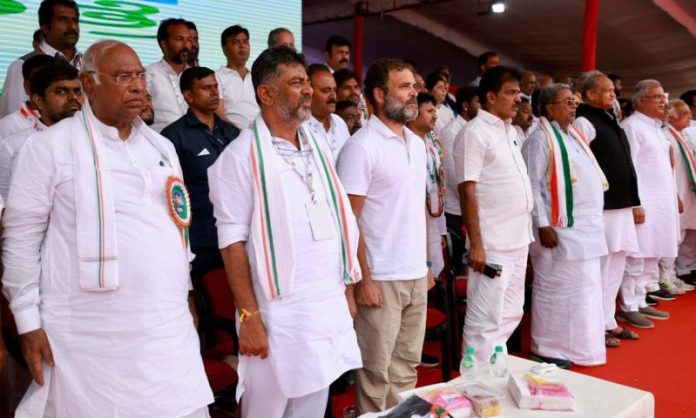 The rally is currently passing through Karnataka’s Ballary district.

On Saturday, at a convention in Ballary, Gandhi continued his attack on the ruling BJP government in the state.

Addressing a huge gathering, Rahul Gandhi criticised the ideology of the BJP and the RSS.

“By this (their ideology) the country is being divided. This is an attack on Hindustan. This is not patriotism, this is anti-national,” he said.

“Through the Bharat Jodo Yatra, we are passing from Kanyakumari to Kashmir. This is a 3,500 km journey. It started from Kanyakumari and reached Karnataka. In the beginning, we assumed that walking 3,500 km was a tough task. But, later, it went on to become an easy task,” the Congress leader added.

“Whenever we felt fatigued, a certain force encouraged us and made us march ahead. The words of small children, physically challenged, aged and poor served were sources of inspiration. The padayatra was taken up a month ago, people belonging to different religions, backgrounds are together putting steps ahead,” he said.

“This ideology of togetherness as proposed by Basavanna, Ambedkar, Narayana Guru is found during padayatra. This nature is in the blood of Kannadigas, this can’t be clinched away,” he added.

Slamming the Basavaraj Bommai-led Karnataka government, he questioned: “Why there are 2.5 lakh vacancies in Karnataka?”

He further said if the youth want jobs in police, they need to pay Rs 80 lakh.

“The ruling BJP in the state is against Dalits and the people of backward communities. The atrocities on Dalits have risen by 50 per cent. The fund of Rs 8,000 crore reserved for the development of people of this section has been utilised for other purposes,” he said.

Rahul Gandhi also said that his family shared a special bond with Ballary and he would do everything possible for the people of the region, once his party comes to power.