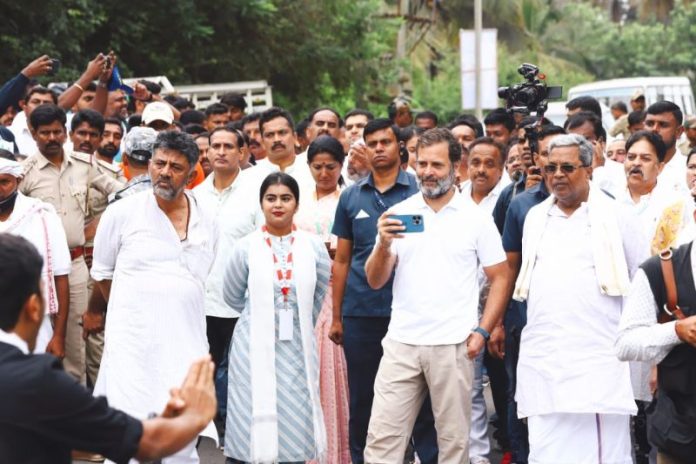 Tumakuru: Congress leader Rahul Gandhi met a Dalit family, who was ostracised after their son touched a pole attached to a God’s idol in Ullerahalli village of Kolar district, on the sidelines of his Bharat Jodo Yatra on Monday.

While interacting with the family, Rahul Gandhi expressed his concern over the injustice and comforted them for having gone through a traumatic experience of “untouchability”.

The family was invited to Tumakuru district where the Gandhi scion is leading the padayatra from Kolar.

Karnataka police had arrested six persons for imposing a fine of Rs 60,000 on the boy’s family.

The incident had taken place on September 8 in Ullerahalli village near Malur town of Kolar district.

After this incident, the elders of the village had asked the boy’s mother to arrange for Rs 60,000 to reorganise the procession as her son had touched the deity’s sacred pole.

They also threatened that her family would be boycotted if the fine was not paid.

Initially, the authorities turned a blind eye to the incident but later swung into action. They broke open the temple lock and allowed Dalit families to have darshan of the deity and also promised government land for the family concerned.

Bharat Jodo Yatra, which entered day 33 this morning, resumed from Pochkatte in the Tumakuru district.

It will enter the Chitradurga district today after covering Chamarajanagar, Mysuru, Mandya and Tumakuru districts.

The padayatra will cover Hiriyuru, Challakere and Molakalmuru towns of the Chitradurga district amid tight security.

Vehicular movement has been banned on the highways in the Chitradurga district and alternative arrangements made.