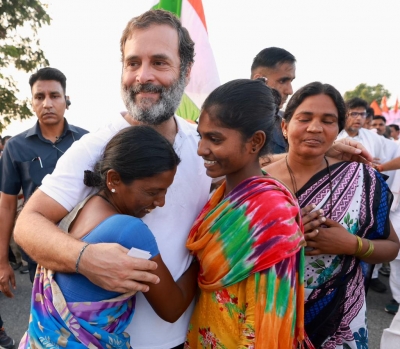 Bharat Jodo Yatra to end in K’taka on Sun; Cong thanks people for making it a success

Raichur:  As Rahul Gandhi-led Bharat Jodo Yatra is set to end in Karnataka on Sunday, the state unit of the party has thanked people for making the padayatra successful.

Youth, women and farmers participated in the rally in large numbers. They have not seen anything political in this. Everyone has taken part to establish peace in the country, Shivakumar stated.

Like how people came all the way from far away places and villages to have one glimpse of late PM Indira Gandhi, they came to see her grandson Rahul Gandhi also during Bharat Jodo Yatra, Shivakumar explained.

“I congratulate all people who participated in padayatra. The padayatra is not religious or party. It is based on humanity,” he said.

Whatever is said, Rahul Gandhi is the only leader in the country who has taken up the padayatra of 3,570 kilometres. He braved the tough weather marching ahead. This March is for bringing change, he said.