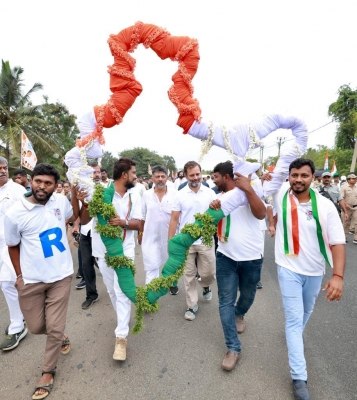 Bharat Jodo Yatra’s success will be judged by poll results

With one-fourth of his 150-day mission complete, it may be too early to predict the results of Rahul Gandhi’s Bharat Jodo Yatra.

The Yatra has so far proved to be a great photo opportunity for him as well as the people who are joining him, which has created quite a stir on social media. Whether it is the hugs, chit-chat or holding little children in arms, or walking undeterred by the rain, or climbing atop an 80-foot overhead tank to wave the national flag, or simply standing in a group, the pictures are going viral.

The most talked about picture, of course, was his tying the shoelaces of his mother, Sonia Gandhi, when she joined him in the Karnataka leg.

But then, viral pictures are never the barometer of political achievements. Even the crowds that join a rally or follow a Yatra cannot vouch for political success, which, in our democracy, is all about the ‘right’ click on the EVM.

For the right click, the leader or the political party has to get immersed among the people 24×7, aggressively strike on issues and follow up with equal enthusiasm, and never stay away, come what may.

With Rahul Gandhi, the public perception of him being the perennial non-striker continues to persist. He joined politics in 2004 and since then the Congress has been shrinking all over the country. Today, its presence is almost negligible in Uttar Pradesh, which was once the pillar of the party, and the situation in other states, except in the south, is not very different. The party’s declining fortunes have been further aggravated by desertions of veterans and cadres.

Rahul’s Bharat Jodo Yatra also comes at a time when he and his mother are facing the heat of the Enforcement Directorate in the National Herald case. To beat the heat, the Yatra was an idea to go to the people and tell the party cadre that the party is very much around, and the Gandhis can connect.

The Yatra is a bid by Rahul and his close associates in the party to desperately alter two most pain points — the party’s battered electoral fortunes and his bruised image. Even after almost two decades in politics, and having been cushioned each time the party has faced defeat, this is the first time that Rahul is doing a solo act.

The fifth-generation dynast of the Nehru-Gandhi family, Rahul has everything to prove today, and this Yatra holds the key to his political future. Crowds have joined him in Kerala, where the Congress is strong. In Karnataka, the state party leaders have tried to put up a good show. The response in both the two states has not been overwhelming, from the perspective of people, but the party cadre has been galvanised.

Through this Yatra, Rahul is also trying to connect with the youth. At every station he meets young people, especially the unemployed ones and tries to impress them with “facts” about the Narendra Modi-led government, how its policies have taken away jobs and affected the small industries.

The Congress social media sites are on an overdrive to highlight the issue. Rahul is also aggressively touching the raw nerve with his question-answer sessions, social media posts and TV bytes. He never misses any opportunity to slam the Centre’s economic policies.

In a tweet, he wrote: “Met immensely talented youth, today. Some were Engineers, some were MBAs, but all ‘educated jobless’. PM’s priorities are clear: It’s not 2 crore jobs per year but ‘PM ka PR & PM ke 2 Yaar’. What youth need instead is a job-creation strategy which will fulfil their aspirations.”

Also, at the centre of his yatra is the theme of brotherhood, which he says is “too precious to be lost to the hateful and greedy ploys of a few”. He has been making concerted attacks on the BJP and RSS, saying they are pushing a communal divide and making the country weaker

From the beginning of the Yatra, Rahul has been attempting to hammer in the issues of rising unemployment and growing communal hatred. These are the two issues which he believes can drive the people, especially the young, back to the party. The Congress has said that the Yatra will be a “transformational moment” for Indian politics and a “decisive moment” for the party’s rejuvenation.

The Gandhis are hoping for a miracle from the Bharat Jodo Yatra, the like of which India has not seen in decades. The last time a politician undertook a national padyatra was in 1983, when Chandra Shekhar, president of the erstwhile Janata Party, and not yet a Prime Minister, undertook an over 4,000-km yatra against Rahul’s grandmother, the then PM Indira Gandhi.

At the end of that padayatra, Chandra Shekhar succeeded in being catapulted from Uttar Pradesh’s Ballia district to national politics. He was 56 then; Rahul is 52 now, and leading the Yatra for a purpose.

But can this Yatra do what Chandra Shekhar did to his grandmother? The question is still in the realm of speculation. The possibility may seem too far-fetched at the moment. Rahul’s hopes are high, but whether his hard work will galvanise the cadre and help improve his image, is something which cannot be predicted yet.

Covering 1,000 km in 38 days is not a mean feat. The Yatra may have whatever outcome, Rahul Gandhi may or may not rise up to the dynastic benchmarks, but what he has shown to the country is that he has stamina, which is proving to be quite a hassle for the rest of the Congress leaders. Matching his strides may be a nightmare for others, but for Rahul, the walk is certainly that of a man on a mission.

The 150-day journey will not yield real results. The real outcome will be the elections in Himachal, Gujarat, Karnataka, Rajasthan … and then the 2024 battle for the Lok Sabha. By staying away from the party’s top post, Rahul may duck the responsibility of unfavourable results, but directly or indirectly he will have to face the blame. Especially because if the party does well at least in Karnataka, loyalists will at once raise a toast to him.