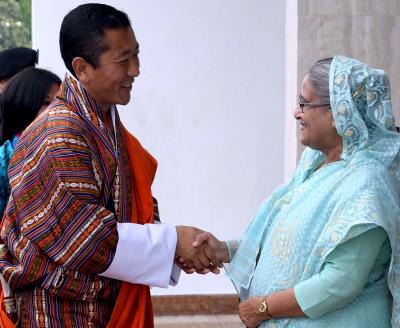 Dhaka:  Bhutanese Prime Minister Lotay Tshering, who is in Dhaka to join the celebrations of Bangabandhu Sheikh Mujibur Rahman’s birth centenary and the golden jubilee of Bangladesh’s independence, has paid a courtesy visit to his counterpart Sheikh Hasina.

Hasina greeted Tshering at the Prime Minister’s Office in Dhaka around 11 a.m. on Wednesday. The leaders then held a meeting, bdnews24 reported.

Tshering arrived in Dhaka on Tuesday morning to join the double celebrations. He then visited the National Martyrs’ Memorial in Savar to pay respects to the Liberation War martyrs.

Afterwards, he visited Bangabandhu Memorial Museum to pay tribute to the Father of the Nation Bangabandhu.

Tshering joined a dinner hosted by Hasina at Pan Pacific Sonargaon hotel on Tuesday night after a meeting with Foreign Minister AK Abdul Momen. He participated in a cultural programme there.

The Bhutanese premier will join the seventh day of the 10-day programme at the main venue of celebrations, the National Parade Ground.

Tshering will leave for Bhutan on Thursday morning wrapping up his three-day visit.

The government heads of five neighbouring countries are attending the celebrations.