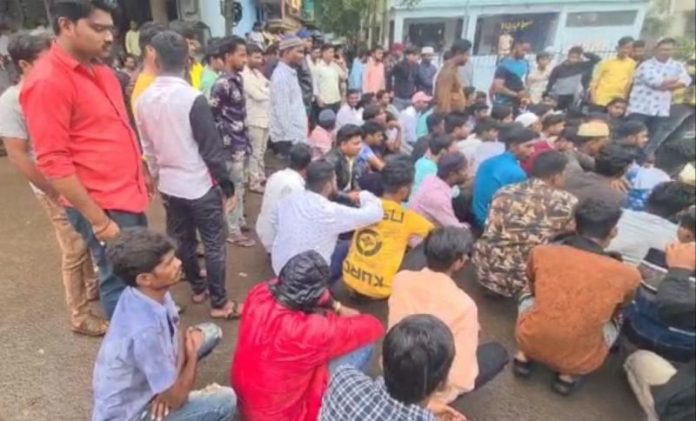 Bidar: Karnataka police on Friday arrested four persons in connection with the incident of Hindu activists barging inside the historical Mahmud Gawan madrasa in Bidar city and performing puja.

The Muslim organisations, which had earlier called for a protest after Friday prayers condemning police inaction, have called off the protest following the arrests.

Of the nine accused named in the FIR, Munna, Naresh, Yallalinga and Prakash have been arrested. However, the Karnataka police are on a high alert in Bidar district and security around the Mahmud Gawan madrasa and Masjid has been tightened.

Photos and videos of the incident have gone viral on social media.

According to police, a group of Hindu activists who participated in the Dussehra procession in Bidar barged inside the premises of the historical Mahmud Gawan madrasa on Wednesday night.

Considered a heritage building, the madrasa is maintained by the Archaeological Survey of India. It was built in AD 1460 and features among the important monuments in India.

While breaking inside the protected monument by breaking open locks, the activists raised “Jai Sri Ram” and “Jai Hindu Rashtra” slogans and conducted worship according to Hindu rituals at one of the corners of the building, police said.

The photos and video show a big group standing on the steps of the monument. The police have lodged nine cases in connection with the incident.

Protesting against the incidents, the Muslim organisations demanded action against the accused and warned of a huge protest after Friday prayers.

Condemning the incident, AIMIM leader Asaduddin Owaisi said that extremists broke the gate lock and attempted to desecrate the historic Mahmud Gawan masjid and mosque. Addressing Chief Minister Basavaraj Bommai and Bidar police, he asked, “How can you allow this to happen? BJP is promoting such activity only to demean Muslims,” he alleged.

A manhunt has been launched for the other accused.