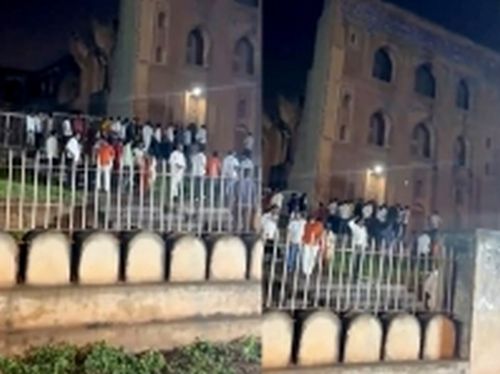 Bidar: Karnataka Police is on high alert as Muslim organisations have warned of protest on Friday after Hindu activists barged inside the historical Mahmud Gawan madrassa in Bidar and performed puja.

The incident took place on Wednesday. Photos and videos of the incident have gone viral on social media.

According to police, a group of Hindu activists who participated in the Dussehra procession in Bidar barged inside the premises of the Mahmud Gawan madrassa on Wednesday night and performed puja.

Considered as a heritage building, the madrassa is maintained by the Archaeological Survey of India. The madrassa, built in AD 1460 is considered one of the important monuments in India.

The Hindu activists who barged inside the protected monument by breaking open locks, raised “Jai Sri Ram” and “Jai Hindu Rashtra” slogans and conducted worship according to Hindu rituals in one of the corners of the building, police said.

Photos and videos show a big group standing on the steps of the monument. Nine cases have been lodged in connection with the incident and three persons taken into custody.

The Muslim organisations in Bidar have protested against the incident. They have also demanded action against the accused and warned of a huge protest after Friday prayers.

Addressing Chief Minister Basavaraj Bommai and Bidar police, he asked, “How can you allow this to happen? BJP is promoting such activities only to demean Muslims,” he stated.