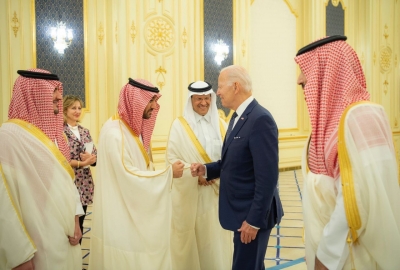 Washington:  US President Joe Biden believes that it is time for Washington to rethink its relations with Saudi Arabia after the latter’s action in partnering with Russia to lead the OPEC cartel to cut oil production which threatens to spike gas prices in the winter before the crucial November 8 mid-term elections to the 435-member House of Representatives.

In an interview with CNN, Biden said: “I am in the process, when the House and Senate gets back, they’re going to have to, there’s going to be some consequences for what they’ve done with Russia.”

The decision by the Saudi-led OPEC oil cartel to cut production last week prompted anger at the White House, where officials said Biden was personally disappointed by what they called a “shortsighted” decision.

The move, which came three months after Biden visited Saudi Arabia and met Crown Prince Mohammed bin Salman, has the potential to raise gas prices in the weeks ahead of November’s midterm elections.

“Let’s get straight why I went… I didn’t go about oil; I went about making sure that we made sure that we weren’t going to walk away from the Middle East,” Biden told CNN.

After reaching highs over the summer, gas prices had been steadily decreasing, providing Biden and his top aides a potent talking point in the lead-up to the elections.

But a combination of factors, including rising demand and maintenance at some US refineries, has caused prices to begin ticking back up.

The OPEC+ decision is poised to aggravate those factors, CNN reported.

For Biden, the decision was a particular affront because of his efforts over the summer to repair ties with Saudi Arabia, despite the kingdom’s woeful human rights record and Salman’s role in the murder of dissident journalist Jamal Khashoggi.