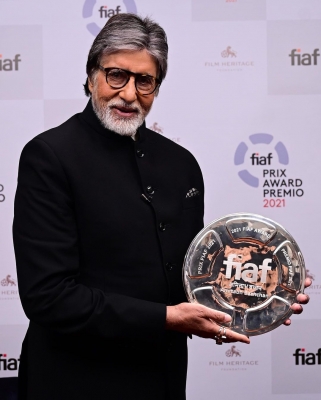 Mumbai: Bollywood icon Amitabh Bachchan on Saturday conveyed his thanks to International Federation Of Film Archives (FIAF) for honouring him with the prestigious FIAF Award. He also posted a picture on Instagram from the event.

The veteran actor is the first Indian to get this award that recognises his efforts to preserve film heritage in the country. The award was presented to him virtually by Hollywood filmmakers Martin Scorsese and Christopher Nolan on Friday.

“I am deeply honoured to have been conferred with the 2021 FIAF Award. Thank you to FIAF and to Martin Scorsese and Christopher Nolan for bestowing the award on me in the ceremony today. Our commitment to the cause of saving India’s film heritage is unshakeable and Film Heritage Foundation will continue its efforts to build a nationwide movement to save our films,” he wrote alongside his Instagram image.

With another picture he posted the same day, he wrote: “Preserve Cinema .. preserve film .. preserve our Heritage .. for posterity !!Preserve the greatest INTEGRATOR in the World today .. When we sit inside a darkened hall to see a film we never ask the caste creed colour or religion of the person sitting next to us. yet we watch the same product . we laugh at the same jokes , we cry at the same emotion, we sing the same songs ..In this vast Universe, Cinema integrates …brings people together. Where in this fast disintegrating world do we find such examples.”

FIAF is a global organisation comprising film archives and museums across the world. Bachchan’s name was nominated for the honour by the FIAF affiliate Film Heritage Foundation.