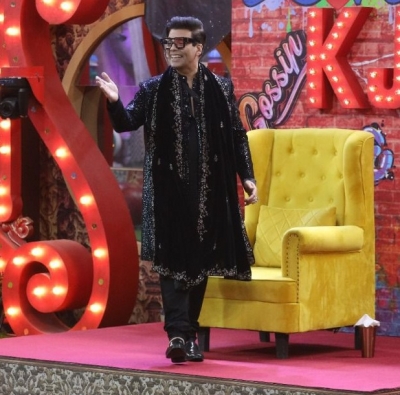 Los Angeles:  As Bollywood superstar Salman Khan is down with dengue, filmmaker Karan Johar has come to rescue and will be seen hosting ‘Bigg Boss 16’ episodes.

With the festivities round the corner, the ‘Bigg Boss’ house will turn into ‘KJo City’. This ‘vaar’ will be unique and special because it will be led by the one and only Karan Johar.

As seen in the previous episode, the ‘punished captain’ Archana Gautam had a tough time in the house with the whole house trying to sabotage her captaincy. Gori Nagori, who got into a huge fight with Archana, is questioned by Karan Johar on her unacceptable behaviour.

The host reprimands Gori for being disrespectful to ‘Bigg Boss’ and asks the whole house if Gori’s provocation was done with an intent to hurt.

Doing ‘Saaf Safai’ before Diwali is a festive mandate in India and keeping up with the tradition, Karan too does some ‘Mann ki safai’ in the ‘Bigg Boss’ style.

Karan asks everyone to name a housemate who needs ‘Mann ki safai’ the most. They will be asked to cleanse the contestant whose name they take by spraying water on them.

In this interesting twist, most of the housemates including, MC Stan, Nimrit Kaur Ahluwalia, and Tina Dutta among others shower a jet of water on Priyanka Chahar Choudhary and mention their reasons for doing so. It will be interesting to watch the aftereffects of this ‘safai’.

Switching to a celebratory mode, Karan welcomes the contestants in ‘KJo City’.

Hosting the ‘vaar’ for this weekend, Karan Johar adds his own tadka to it. He narrates some fun situations on the songs of his films and chooses a few contestants to take over the stage and enact them. Karan calls Priyanka and Ankit Gupta to enact the most iconic ‘Channa Mereya’ song from his movie ‘Ae Dil Hai Mushkil’ but with a twist! While Priyanka plays Ranbir Kapoor, Ankit essays Anushka Sharma.

Ankit surprises everyone with his romantic side as he picks Priyanka in his arms.