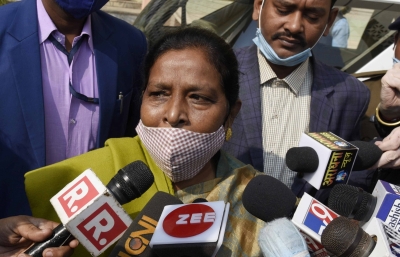 Patna: A day after allegations of land grab were levelled against her brother Ravi Prasad alias Pinnu , the Deputy Chief Minister of Bihar, Renu Devi, said on Saturday that she doesnt have any relation with her brother for the last five years.

Ravi Prasad has been accused of grabbing a land worth Rs 6 crore in the Patel Nagar area of Patna, belonging to two persons named Brahmanand Singh and Sharawan Kumar.

“Ravi Prasad alias Pinnu along with his associates grabbed my plot in Patel Nagar on June 21. They have even started the construction of a wall on the plot. When we objected to their forcible act, Prasad threatened me with dire consequences and asked his associates to take me and Sharawan to Deputy CM Renu Devi’s official residence in Patna,” Brahmanand Singh had said on Friday.

He also shared the CCTV footage of the incident.

“I have been a public representative for the past 42 years and I have never courted any controversy,” she added.

“The plot owner Brahmanand came to my residence on Friday. As I was not present there, I did not meet him. Still I have asked the concerned officials to investigate the matter and take appropriate action,” Renu Devi said.

She also denied the land grab allegation levelled against her brother, saying that that it is a matter of land dispute, and not land grab.