Home Agency News BJP, Cong gear up to woo tribal voters in MP ahead of... 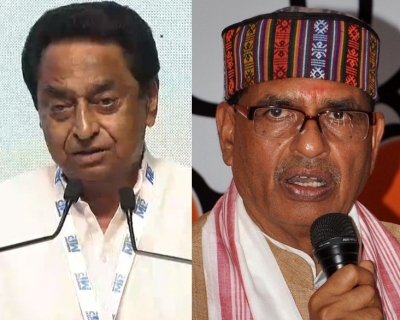 BJP, Cong gear up to woo tribal voters in MP ahead of 2023 assembly polls

Madhya Pradesh Chief Minister Shivraj Singh Chouhan has announced the implementation of the PESA (Panchayats Extension to Scheduled Areas) Act-1996 with some amended rules in the state “to empower the people of tribal community”.

Bhopal: Madhya Pradesh Chief Minister Shivraj Singh Chouhan has announced the implementation of the PESA (Panchayats Extension to Scheduled Areas) Act-1996 with some amended rules in the state “to empower the people of tribal community”.

The Chief Minister made the remarks while addressing a gathering of tribal community at state sponsored ‘Janjatiya Garav Diwas’ event, which was being observed to mark birth anniversary of tribal freedom fighter Birsa Munda on Tuesday.

The main rationale behind the act is to “preserve the tribal population from exploitation with an active involvement of the Gram Sabha”.

Chouhan claimed that his government has introduced several tribal specific schemes in the state and the implementation of PESA Act “today is the pride day for all of us”.

Introducing the act at a time when just almost a year left for the state assembly elections, the ruling BJP will be eyeing tribal votes that account for 21.1 per cent in the state

Chouhan said, “PESA Act is not against anyone, we are introducing it considering social harmony.”

It was the second edition of the mega event – ‘Janjatiya Gaurav Diwas’ organised by the BJP government, the first one was organised in 2021, during which Prime Minister Narendra Modi had announced one-and-a-half dozen tribal centric schemes of both Centre as well as the state government.

As the tribal population has a crucial role to play in Madhya Pradesh’s politics, both the Congress and the BJP take on each other on tribal issues. The Congress also organised a tribal programme in Chhindwara, the home district of state Congress president Kamal Nath.

Former Chief Minister Nath, during the Congress’ event, did not forget to mention that the PESA Act was “framed during the Congress rule in the state”. He even questioned the BJP that “why the act was not implemented when it was framed in 1996”.

The Congress has been questioning the timing of implementation of PESA Act and other tribal centric schemes implemented by Shivraj-led government since last year. “The BJP has been in power in Madhya Pradesh for the last 17 years, but did nothing for the tribal community and now when the elections have arrived, they are making tall claims to use tribals for their political benefits. In the last assembly elections, tribal and entire people of Madhya Pradesh have shown them the exit door, this is reason why they are in panic mode and trying to grab the power by making false promises now,” Nath said.

To woo tribal voters in upcoming assembly elections, scheduled to be held in December 2023, both the parties have geared up since the past few months. A series of meetings are being organised by both the national parties at different districts.

Reacting to allegations made by the Congress on tribal issues, state BJP president and Khajuraho MP V.D. Sharma said, “Congress should explain why the PESA Act wasn’t implemented when it was made in 1996. They (Congress) did not do it and now when the BJP government is doing for the betterment of tribals, why are they are having pain in stomach,” Sharma had said on Monday.

Importantly, the state BJP under the leadership of Chief Minister Chouhan came with a “master stroke” to organise – ‘Janjatiya Gaurav Diwas’ in 2021, three years after it could fetch victory on just 16 (out of the 47) seats reserved for Scheduled Tribes (STs) in the state. The BJP’s tally in these reserved seats was 31 in 2013 and 29 in 2008.

The BJP has intiated the massive tribal outreach programme strategically in September 2021 during Union Home Minister Amit Shah’s visit in Jabalpur, has announced the establishment of a museum dedicated to Gond freedom fighter Raghunath Shah and his son Shankar Shah. Prime Minister Modi and Home Minister Shah visited Bhopal in 2021 to attend the first edition of ‘Janjatiya Gaurav Diwas’ and had announced over one-and-a-half dozen tribal-centric schemes, including delivery of free food grains at door step in tribal areas.

Now, with the stage set for the next assembly elections, on one hand Chouhan would be probably seen making all efforts to prove that his image as ‘mama’ still has existence among the people of the state and he is still the strongest and the most popular BJP leader in the state. While, on the other, the Congress led by Nath would be seen making all possible efforts to come back to power in 2023. For that, both the sides are leaving no stone unturned in wooing the voters from tribal communities.