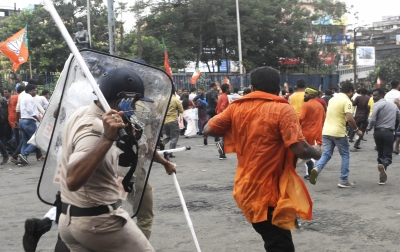 Kolkata: A division bench of Calcutta High Court on Tuesday directed the West Bengal government to refrain from further unnecessary arrests and harassments of any individual in connection with the BJP’s march to the state secretariat of Nabanna against corruption issues on September 13.

In a petition filed against the state government accusing it of continuing harassment of the BJP workers in the matter at the division bench of Calcutta High Court’s Chief Justice Rajasekhar Mantha and Justice Rajarshi Bharadwaj, BJP’s counsel Subir Sanyal alleged that that the police have continued arresting people even days after that day of the agitation. Till now a total of 550 persons have been arrested in this connection, Sanyal informed the division bench.

Countering his argument, state’s Advocate General (AG), S.N. Mukhopadhyay informed the bench that most of the people detained in the matter have been released at a later stage. “None has been arrested without any reason. Let the petitioner provide the names of those arrested and the state government will examine when and under what circumstances they were arrested,” the AG argued. He also said that arrests were made on the basis of specific complaints and the law had taken its own course in those cases.

However, the BJP counsel informed the bench that the police have harassed a number of BJP supporters in the Bowbazar and Burrabazar areas in central Kolkata. “They were not arrested on grounds of disturbing the law & order. Being a part of any protest rally is the constitutional right of the citizens of the country. At least the harassment should stop on the occasion of the forthcoming Durga Puja festival,” the BJP counsel argued.

After hearing both sides, the division bench directed the state government to ensure that there are no further unnecessary arrests or harassments in the matter. The same bench will hear the matter again on October 31.