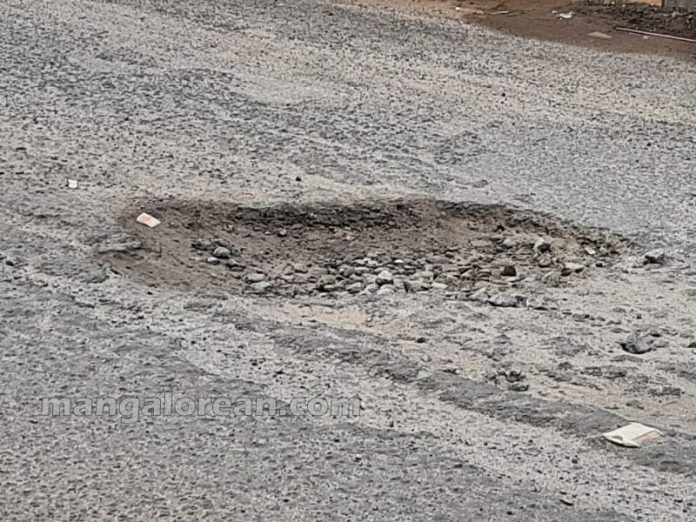 BJP Targeting MLA UT Khader for Pathetic State of Thokkottu-Deralakatte 4-Lane Road. However, in reality, it is not TRUE, as per the people who travel on this road, including me

Mangaluru: Traveling on the Thokkottu-Deralakatte road is akin to a Ride on a camel’s Back- Just Bumpy! Once a nice looking road is dilapidated, filled with potholes huge as craters, etc, The entire stretch of the said road is nothing but in SHAMBLES, PATHETIC and very DISGRACEFUL, and DISASTROUS. But has anyone travelling on this road ever complained to the concerned authorities, or they might have been ignored by the officials? Imagine the people travelling on this road to work or educational institutions, who have to bear the brunt of the pathetic road. 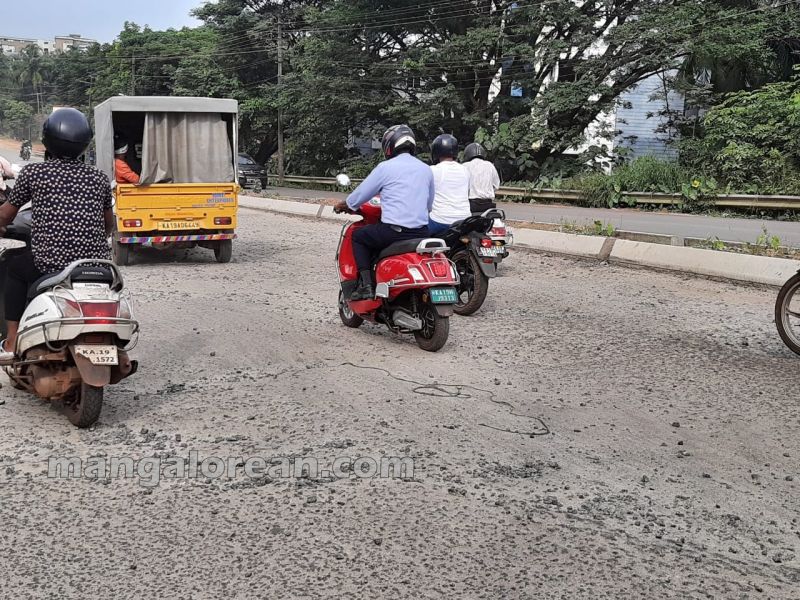 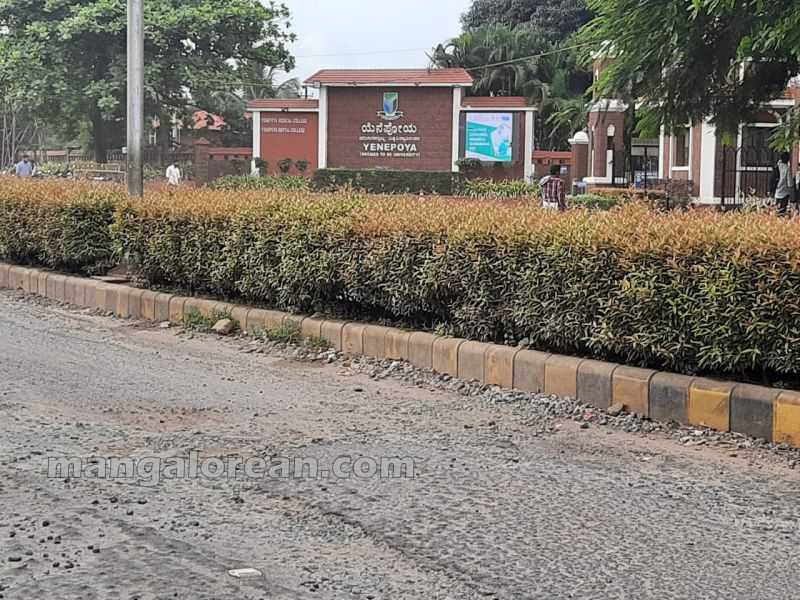 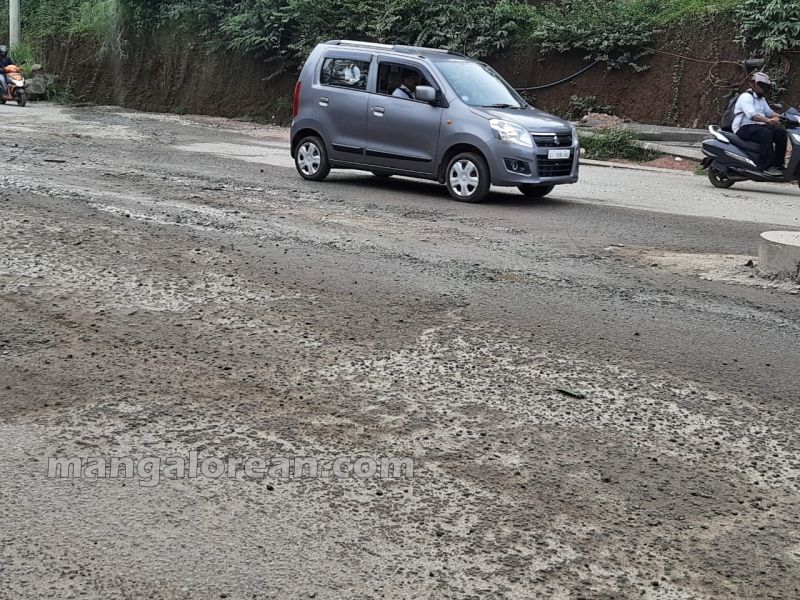 A few days ago I had taken a ride to Father Muller Homeopathic Medical College & Hospital, and also to Yenepoya Institutions, both located in Deralakatte, my ride on the two-wheeler was nothing but a nightmare, and I had a feeling that I may not reach the destination in such a treacherous road. But I was confident that in case I fell off my scooter, and got injured, either Father Muller Hospital or Yenepoya Hospital could have treated me, being a journo. Daily working class people, doctors, students and others travel on this day and night and they have to go through hell commuting on this road, and nothing has been done for the safety of the motorists and pedestrians.

It should be noted that the Thokkottu-Deralakatte- Mudipu road, which was developed into a four-lane stretch by the public works department (PWD) a few months ago, is in a pathetic condition, with many stretches losing their base and developing potholes. The busy road that connects several institutions, including medical colleges, engineering colleges, and Mangalore University, is in such a deplorable condition, that driving on it has been a tough task for motorists, including those driving four-wheelers. Though the four-lane stretch between Thokkottu and Deralakatte, on the Thokkottu-Mudipu road was asphalted before the monsoon, it has already been damaged due to heavy rain. 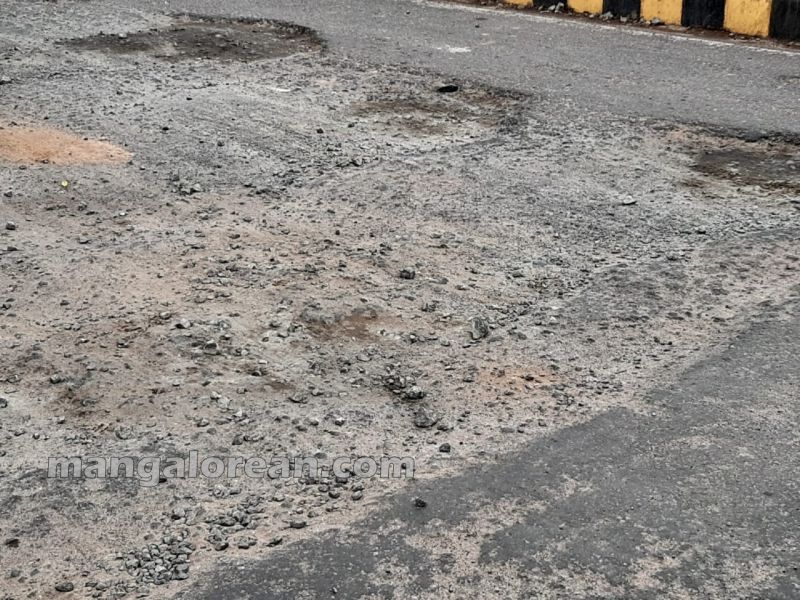 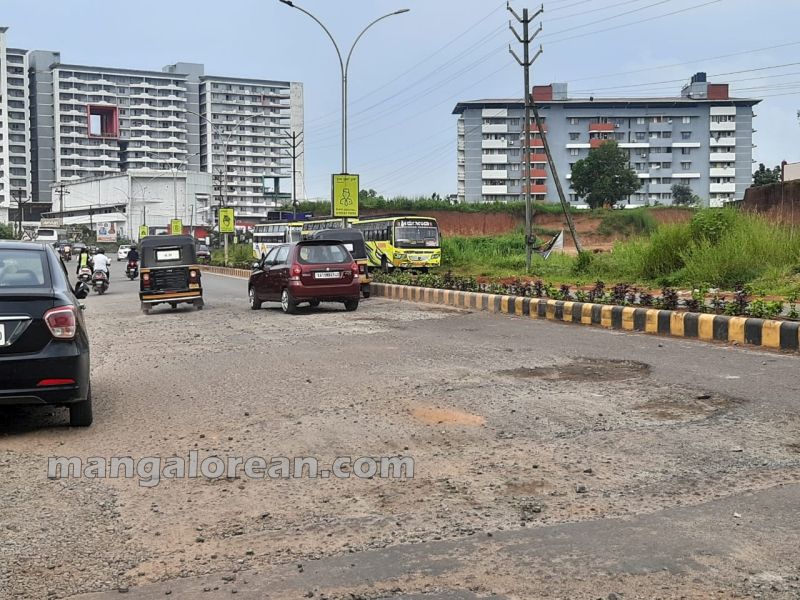 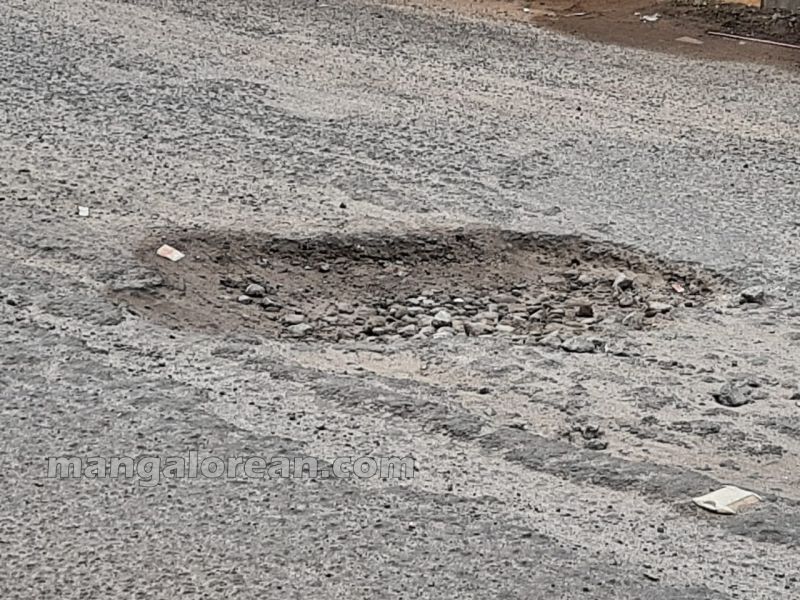 Meanwhile, the Dakshina Kannada BJP has taken up the issue of the bad road, to target the MLA of the Ullal constituency, U T Khader, who is from the Congress. Sharing a picture of the road, the BJP Dakshina Kannada unit wrote on its social media page, “A road developed spending crores of rupees has gone down the drain during rain. The road between Thokkottu and Deralakatte was developed into a four-lane stretch, and it was asphalted too. However, the road has vanished. The busy road with heavy traffic flow has been destroyed.”

Meanwhile, people have also been sharing memes to describe the pathetic condition of the road, through sarcasm. Tit-for-tat, in reply, MLA U T Khader said that he has strictly instructed officials not to release the bills for the work taken up on the road. “The road stretch was developed under a special grant, through the State Highway Development Project (SHDP) of the PWD, at an estimated cost of Rs 12 crore. The district started receiving rain about 15 days before the normal monsoon. As a result, the unexpected rain damaged the asphalt road. No bills have been cleared to the contractor,” said Khader. 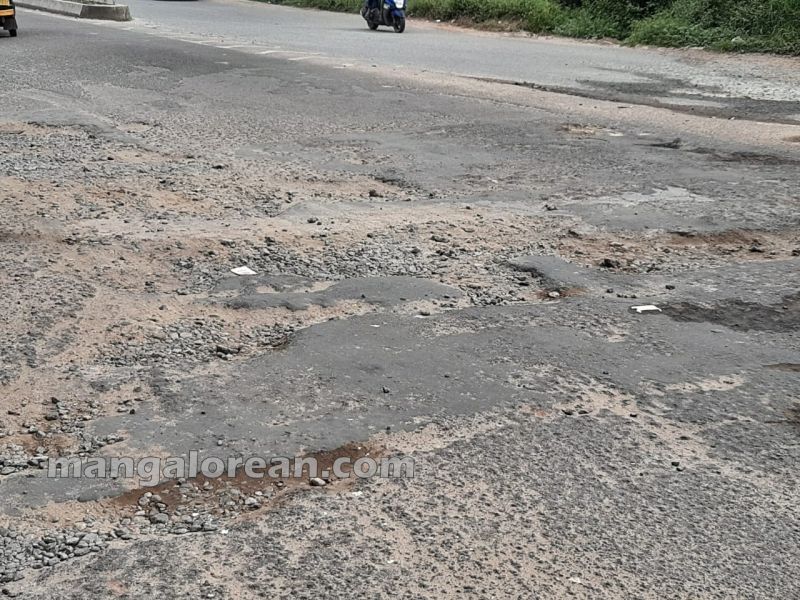 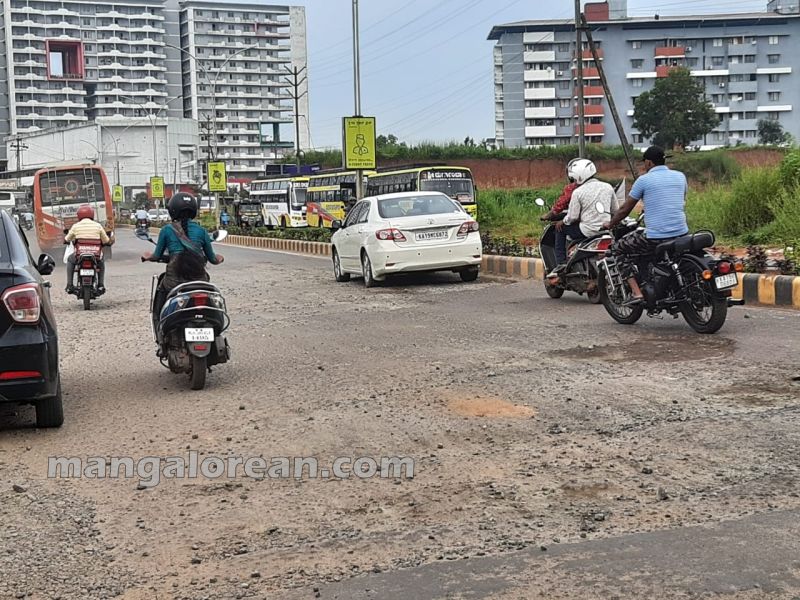 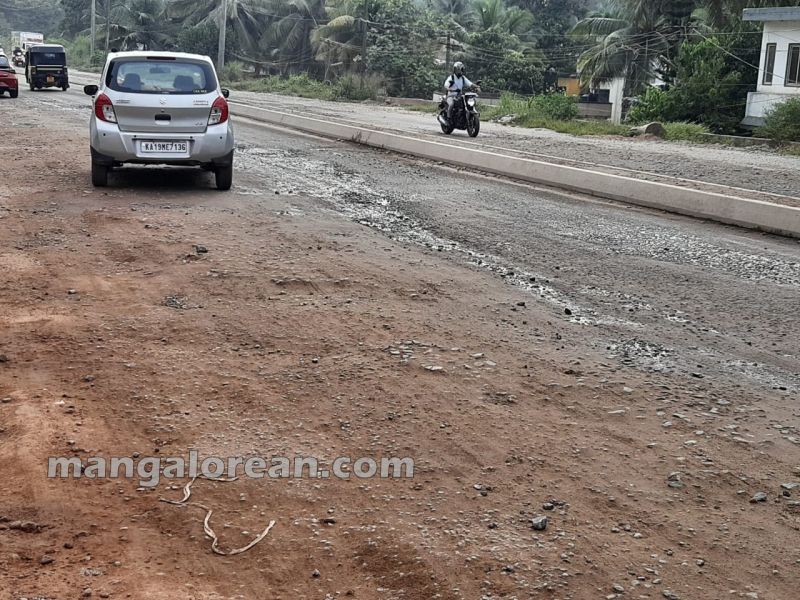 Khader further said, “The contractor has been taking temporary measures like filling the potholes by dumping construction jelly. However, it is not sufficient to keep the road motorable. Soon after the rainy season, the work will resume, and once it is completed, it will be one of the best state highway stretches. Once the work resumes, it may take at least two weeks to complete”. Well said by MLA Khader, but as of now the stretch of the aid road is still in pathetic condition, with only minor patchwork done, here and there, thereby fooling the public.

Earlier due to heavy rains, along with heavy traffic taking this route has formed a worst-case scenario for repair crews who were struggling to find and fix all the emerging potholes. But did they do the job right? I don’t think so. Throwing some loose stuff in a hole and just hoping the traffic driving over it will fix it, will not serve the purpose. The evidence now says otherwise. I think the only way to solve the pothole mess is to lay a two-layered concrete road with a seal coat. By the way, have you taken this road recently- If you haven’t, please try to stay away from it!

But when it comes to fixing the bad roads they are slow and careless. As long as cheap quality tar is being used and layered too thinly, we will continue to have these problems every year. It’s an obvious pattern and I wonder why nobody is looking into this. How can we ever call this City a SMART CITY, when we see a bunch of dilapidated and potholed roads existing at every nook and corner? Commuting on this road is like an obstacle course. Drivers keep swerving and manoeuvring to make sure they miss every pothole. These potholes have also worsened the chronic traffic jams which commuters face every day, and anyone who has had the misfortune of commuting on this road will testify to what a great pain the ride is owing to the numerous potholes that punctuate the road. 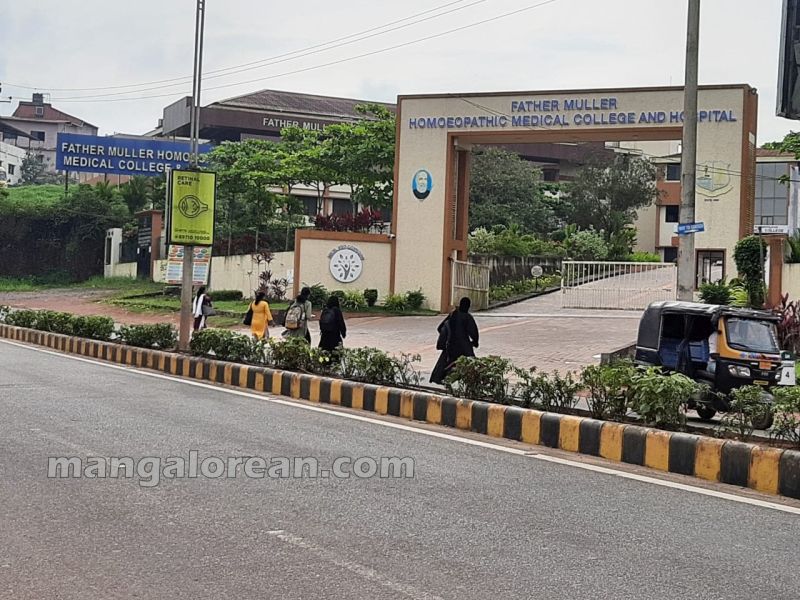 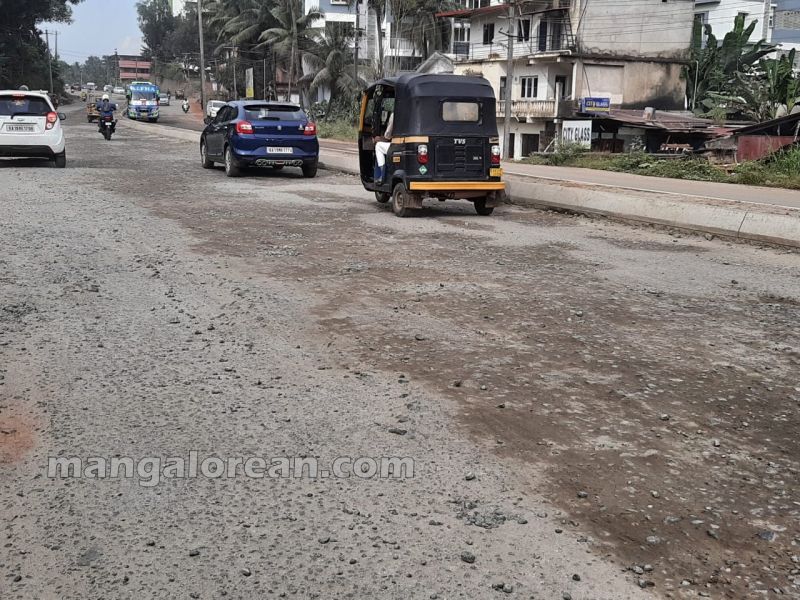 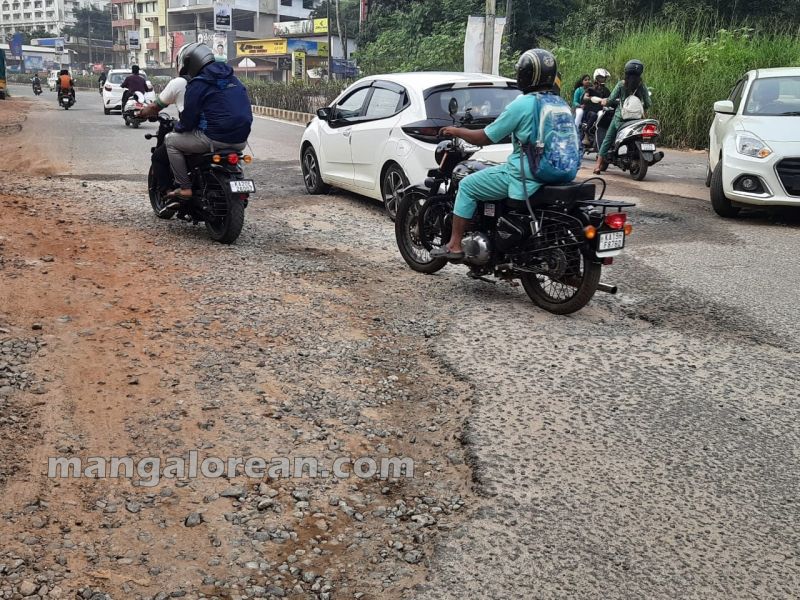 Potholes aren’t just a nuisance for drivers; they also constitute dangerous safety hazards that can produce substantial damage to vehicles, force drivers to veer suddenly in traffic, or even cause the driver to lose control of a vehicle after contact.  The MLA and concerned officials should take quick action to fix the potholes before they get deeper and worse — thereby avoiding severe driving hazards and vehicle damage.