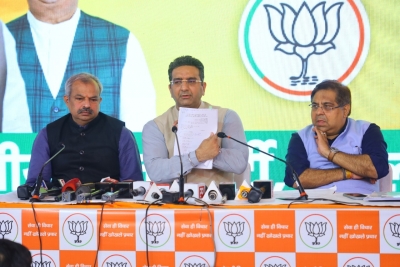 Bhartiya Janata Party (BJP) on Saturday attacked Aam Adami Party after a video of AAP Minister Satyendar Jain surfaced in social media, in which he could be seen getting massage in Tihar Jail.

New Delhi: Bhartiya Janata Party (BJP) on Saturday attacked Aam Adami Party after a video of AAP Minister Satyendar Jain surfaced in social media, in which he could be seen getting massage in Tihar Jail.

At a press conference in which BJP National Spokesperson Gaurav Bhatia and Delhi BJP chief Adesh Kumar Gupta were present, the party also showed the CCTV footage of jailed minister getting the massage by the jail officers.

Taking to Twiiter to react on massage video of Jain, Delhi BJP incharge Baijayant Panda said “This is AAP culture of giving VVIP treatment to those who are on wrong side of law! A tainted and jailed minister of AAP, denied bail five times, gets a massage inside Tihar jail. AAPsurdity at its peak. Shame Panda.”

Another BJP leader Amit Malviya said, “Arvind Kejriwal has reduced Tihar to a massage parlour. His jailed minister Satyendar Jain would get a masseur, who would, in violation of all jail rules, indulge the inmate, because of his proximity to the Delhi CM. Delhi Govt manages Tihar. These corrupt people came to change the Indian Politics.”

BJP spokesperson Shehzad Poonawalla said, “So instead of Sazaa – Satyendar Jain was getting full VVIP Mazaa? Massage inside Tihar Jail? Hawalabaaz who hasn’t got bail for 5 months get head massage! Violation of rules in a jail run by AAP Govt. This is how official position abused for Vasooli & massage thanks to Kejriwal.”

BJP MP Parvesh Verma demanded an apology from Arvind kejriwal for comparing Satyendar Jain to Shaheed Bhagat Singh for being in jail.