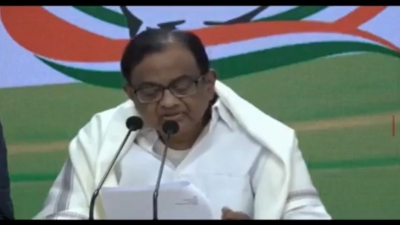 The former minister said that the BJP has revealed its true face in the party’s West Bengal election manifesto as it has made clear that on the first day of government, the BJP will approve the implementation of the Citizenship Amendment Act (CAA).

“The CAA will divide the country, discriminate against Muslims and deprive millions of Indians of their birthright of citizenship. The intent is to intimidate and put fear in the minds of millions of poor and law abiding citizens, especially Muslims, and threaten them with incarceration in detention camps,” Chidambaram said.

He urged that the people of Assam and Bengal must vote decisively to defeat the BJP and its ‘poisonous agenda’.

Home Minister Amit Shah on Sunday released BJP’s manifesto, promising to implement the CAA in its first cabinet meeting if voted to power.

“We have decided to call our manifesto a ‘Sankalp Patra’. It is not just a manifesto but a resolution letter for West Bengal by the country’s largest party. And at the heart of the BJP’s manifesto is ‘Sonar Bangla’,” the Minister said, while officially releasing the manifesto.

Taking potshots at Mamata Banerjee-led Trinamool Congress government in Bengal, Shah said that the state’s incumbent formation has only politicised its administration, criminalised politics and institutionalised the practice of corruptions.

He said that West Bengal has slipped from its position of leadership.