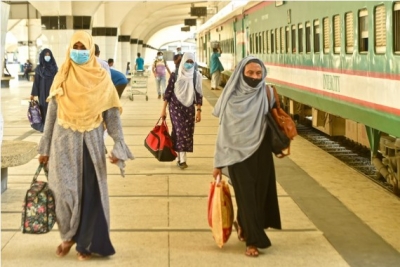 During his speech in the Bangladesh Parliament this week, Rashid said, “There is no place for secularism in Islam.” His comment was opposed by the Awami League lawmakers, including Prime Minister Sheikh Hasina.

But Rashid continued to strongly push for a Constitution based on “Islam as enshrined in the Holy Quran”, negating the often-made claims by the BNP politicians that their party is for “equality before law” of all Bangladeshis.

The BNP had made its political preference clear when it formed the government in 2001 with pro-Pakistan Jamaat-e-Islami as its coalition partner.

For the next five years of the BNP-Jamaat reign, a surfeit of Islamist radical terror groups like HUJI, JMB and Ansarullah Bangla Team surfaced or consolidated their position in Bangladesh, unleashing horrible pogroms against minority Hindus, Buddhists and Christians.

Jamaat-e-Islami had opposed the break-up of Pakistan and the emergence of an independent Bangladesh, with its top politicians functioning as local collaborators of the Pakistan army in its genocidal campaign.

The BNP was born in the military barracks, and its founder and military ruler General Ziaur Rahman had legitimised the pro-Pakistani collaborators by removing the ban on them. Its brand of Bangladeshi nationalism is religion-driven.

The BNP has also backed the Hefazat-e-Islam’s violent street agitations on a wide variety of issues like installation of statues of the nation’s founder Sheikh Mujibur Rahman, anti-jihadist crackdown in France and visit of Indian PM Narendra Modi as a special guest on the Golden Jubilee of Bangladesh’s Independence earlier this year.

BNP Secretary General Fakhrul Islam Alamgir had strongly pitched for the immediate release of Hefazat leaders arrested and booked on charges of violence.

The BNP itself along with its radical allies had periodically unleashed a violent campaign of burning down public transports and bombing crowded locations to enforce their strikes after they lost three successive elections to the Awami League.

“Bangladesh is a secular nation and it will remain secular. Our nationalism is based on our rich language and distinct Bengali cultural identity and that will not change,” Sheikh Hasina reminded Rashid, the BNP MP from Chapai Nawabganj, during the debate in the Parliament.

But Rashid continued to insist on the “innate discrepancy between Islam and Westernised secularism”, and said: “For a country whose population is 90 per cent Muslims or more, it is inconsistent and unacceptable to have a secular polity.”

The BNP leadership did not oppose Rashid’s remarks in the Parliament.

Analysts say that BNP’s fresh pitch for an Islamist state comes at a time when Pakistan-backed Taliban is pushing for power in Afghanistan after the US military withdrawal.

“The BNP always enjoys strong Pakistani backing. Its former PM Begum Khaleda Zia had even graced the Pakistan Army Day programme at the Pakistan embassy in London in 2019 before the parliamentary polls. The Taliban surge in Afghanistan seems to have encouraged BNP,” said Sukhoranjan Dasgupta, author of ‘Midnight Massacre’ on the 1975 Bangladesh coup.

He said the BNP is trying to “bring together all Islamist radical elements under one roof” to challenge the Awami League, which has presided over Bangladesh’s ‘Golden Decade of Development’ (2010-2020).

“The violence during Modi’s visit and to oppose statues of Mujib because statues are anti-Islamic is a clear attempt to question the Bengali basis of Bangladesh and play up the defeated ideology of Pakistan,” Dasgupta said.

Jayanta Roy, author of ‘Nationalism on Trial’ that predicted the break-up of Pakistan, said, “BNP’s pitch for an Islamist Bangladesh is a well thought-out attempt to question the very basis of the country’s emergence.”

“The Islamists were defeated in 1971 but were never wiped out. They keep coming back to reclaim their political space with help from external patrons,” said Ray, adding: “And they wish to fish in troubled waters by whipping up religious passions.”

Dasgupta said there is an attempt to consolidate the Islamist eco-system in Bangladesh now, with the general elections just over two years away.

“You have the BNP competing the polls, the Hefazat and Jamaat hitting the streets violently and terror groups like JMB and HUJI carrying forward their hit-and-run on secular politicians, figures and institutions. This is an attempt to finish the unfinished revolution,” Dasgupta said.