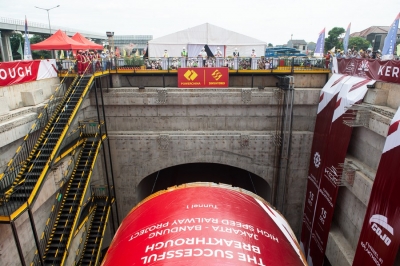 Jakarta: The erection task of all box girders along the Jakarta-Bandung High Speed Railway (HSR) was completed on Sunday, which means the track-laying channel has fully opened, laying a solid foundation for the completion of the HSR and its opening to traffic in June 2023.

The Jakarta-Bandung HSR has a total length of 142 km, with 3 beam yards, No.1, No.2 and No.4, which were responsible for the erection of 2,558 box girders, Xinhua news agency reported.

At present, all 13 tunnels along the railway have been completed. More than 92 per cent of the subgrade, bridge and station civil works have been completed. One high-speed electric passenger train and one inspection train tailored for this project arrived in Indonesia on September 1.

With a design speed of 350 km per hour, the Jakarta-Bandung HSR built with Chinese technology will cut the journey between Jakarta and Bandung, the capital of Indonesia’s West Java province, from more than three hours to around 40 minutes.