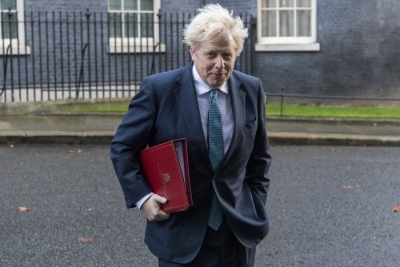 London: British Prime Minister Boris Johnson said on Sunday that regional restrictions in England are “probably about to get tougher” in the coming weeks to curb rising coronavirus infections.

“It may be that we need to do things in the next few weeks that will be tougher in many parts of the country. I’m fully, fully reconciled to that,” he said.

“And I bet the people of this country are reconciled to that because, until the vaccine really comes on stream in a massive way, we’re fighting this virus with the same set of tools.”

The prime minister said his government had taken “every reasonable step that we reasonably could” to prepare for winter, but “could not have reasonably predicted” the emergence of the new variant of the virus, which is said to be 70 percent more transmissible, the Xinhua news agency reported.

Meanwhile, the leader of the main opposition Labour Party Keir Starmer on Sunday called for national restrictions within 24 hours.

Starmer said coronavirus was “clearly out of control” in Britain and the further restrictions should not be delayed.

“There’s no good the Prime Minister hinting that further restrictions are coming into place in a week, or two or three… That delay has been the source of so many problems. So, I say bring in those restrictions now, national restrictions, within the next 24 hours,” he said.

“That has to be the first step to controlling the virus,” he added.

London and many other parts of England have already been under the highest Tier Four restrictions, which require residents in the areas to stay at home, with limited exemptions.

Under the Tier Four rules, people are also urged to work from home when they can, and should not enter or leave those areas. People should also not mix with anyone outside their own household, apart from support bubbles.

Another 54,990 people in Britain have tested positive for Covid-19, bringing the total number of coronavirus cases in the country to 2,654,779, according to official figures released Sunday.

It was the sixth day in a row that daily new cases have topped 50,000 in Britain.

Another 454 have died within 28 days of a positive test, bringing the total number of coronavirus-related deaths in Britain to 75,024, the data showed.