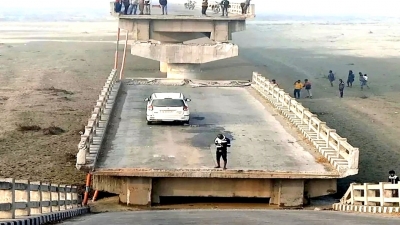 Broken bridges in UP are still waiting for repairs and restoration

Accidents in Uttar Pradesh — be they related to bridges, roads or fire — have an extremely short shelf life.

Lucknow: Accidents in Uttar Pradesh — be they related to bridges, roads or fire — have an extremely short shelf life.

Whenever an accident occurs, inquiries, probes and audits are ordered and the urgency is maintained only for a few days after which the issue is conveniently brushed under the carpet

After the collapse of a nearly 100-year-old suspension bridge in Gujarat’s Morbi, Chief Minister Yogi Adityanath ordered the inspection and examination of all kinds of bridges in the state.

He asked the officials of the public works department and Uttar Pradesh Bridge Corporation Limited to carry out an audit of all suspension bridges, the ones supported by cables and others that are used by motor vehicles.

The report, when it is submitted, will be reviewed by the chief minister’s office.

In Uttar Pradesh, the last incident of bridge collapse was reported in Shahjahanpur district in November last year.

The Kolaghat bridge, connecting Shahjahanpur and Badaun, had broken into three pieces and collapsed. However, no casualties took place.

It has been a year since the accident took place and there have been no reports of the responsibility being fixed.

“The matter is under investigation,” said a senior government official.

In May 2018, in Varanasi, 18 persons were killed when an under-construction flyover collapsed. The incident took place in front of the Varanasi Cantt Railway Station.

Many cars were buried under the heap of rubble and over two dozen persons were injured in the incident. Three persons were pulled alive from the crashed structure.

A team of the National Disaster Response Force (NDRF) was deployed to help the authorities in clearing the debris and pulling out the injured from the debris.

The flyover was constructed by the Uttar Pradesh State Bridge Corporation between Chauka Ghat bus stand and Lahartara.

Uttar Pradesh Chief Minister Yogi Adityanath had formed a three-member committee to investigate the incident. The committee has been asked to submit its findings within 48 hours.

Later, half a dozen engineers in the project were suspended and departmental action was also announced.

It has been four years now but no subsequent action has been taken.

More recently, during Chhath Puja on October 31, a portion of an old and dilapidated culvert collapsed near the Saraiyya village in Chandauli district and several devotees fell into the Karmnasha canal. However, no one was injured and the devotees were pulled out by those present there for the puja.

Apart from the mandatory inquiry, no action was taken.

The Public Works Department (PWD) in Uttar Pradesh maintains almost 2.9 lakh km of road stretch. It also has the mandate of keeping thousands of bridges built over canals, rivers and nullahs free of cracks and damages.

The bridge corporation takes up big ticket projects such as the ones built over railway crossings and wide rivers and tributaries and those being planned around metro corridors.

“Both the agencies have deputed officials to carry out surveys of structures,” a senior officer said.