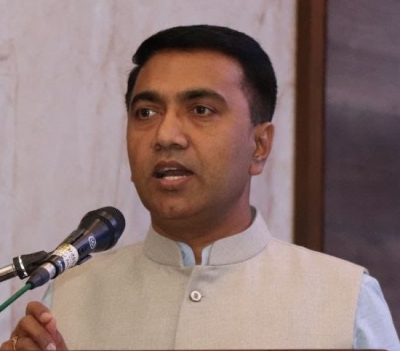 Panaji: Stressing on ‘vocal for local and achieving the goal of self-reliance, Goa Chief Minister Pramod Sawant on Sunday said that the people should buy traditional ‘Akash Kandil’ for Diwali and should not show interest in displaying China-made plastic ones.

“We need to buy Diwali articles from local vendors. Many people make Akash Kandil at home and sell it. Even special schools make it. We need to purchase from them and not import them from other countries. We should not be interested in displaying Akash Kandil from another country. Also we should not speak of ‘Swayampurn’ if we display plastic Akash Kandil imported from China,” Sawant said during a program in North Goa.

During Diwali at many places in Goa the making of eco-friendly Akash Kandil competitions are organised, where Akash Kandil made from coconut tree leaves are seen. However, people flock to buy readymade Akash Kandil from markets to display at homes and business establishments.

He reiterated that the people need to stop importing flowers from outside and grow it here. “This will help us to achieve Swayampurn Goa,” he said.

He said that whatever can be produced locally should be done and people should purchase local.

“Manufacturing of the ‘Kunbi’ saree had stopped. Now it has started again and is getting market across India. This is the concept of vocal for local. We need to start talking about local and purchasing local,” Sawant said.

Sawant, earlier, had urged the weavers and people to bring ‘Kunbi’ saree in fashion to increase its value.

It is believed that ‘Kunbi’ saree, a traditional dressing style of ‘Kunbi’ tribe, existed even before the Portuguese captured Goa. Kunbi saree got a lease of life when eminent Goan fashion designer late Wendell Rodricks promoted it on the fashion ramps.

Sawant said that Kunbi saree should be promoted further and for that production should be increased.

Earlier on many occasions, Chief Minister Pramod Sawant had urged the people of Goa to grow vegetables, fruits and flowers, so they can be stopped importing from neighbouring states and self-reliance can be achieved.