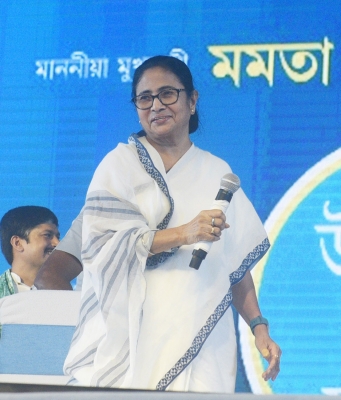 West Bengal Chief Minister Mamata Banerjee, on Wednesday, flayed the Centre and BJP on the Citizenship Amendment Act (CAA) issue, and termed it a “ploy” to mislead the Matua community in West Bengal who are already Indian citizens.

Kolkata: West Bengal Chief Minister Mamata Banerjee, on Wednesday, flayed the Centre and BJP on the Citizenship Amendment Act (CAA) issue, and termed it a “ploy” to mislead the Matua community in West Bengal who are already Indian citizens.

“Before the upcoming Gujarat Assembly elections, the BJP has started the drama of granting citizenship to refugees of certain communities in two districts there. Here in West Bengal, their leaders are trying to exploit the sentiments of the Matuas, who are already Indian citizens. So is it a ploy to first take away their citizenship only to grant them again. Under no circumstance will I allow them to take away the citizenship of the Matuas,” the chief minister said while addressing a public rally at Krishnanagar in Nadia district.

She said that BJP always resurrects the NRC and CAA issues before any election. “Matuas become a tool of their politics. Actually, they are trying to divide Bengal. They are trying to play the same dirty politics with the people here.

Referring to landslide victory of BJP in 2019 from Ranaghat Lok Sabha constituency, where Matua voters play a key role, the chief minister said that if Matuas were not Indians, then how did they vote in the subsequent polls. “The majority of the voters from Ranaghat Lok Sabha constituency voted in favour of BJP. The people there voted and contributed for BJP to come in power. Without the votes of the Matuas could Narendra Modi become the Prime Minister?” the chief minister questioned.

The chief minister also launched a scathing attack on the Union government over the recent aggression of the central probe agencies in West Bengal.

“Our party leaders, workers and even state government officials are being harassed by central agencies, so that they are unable to pursue development activities in the state before the forthcoming panchayat polls. Some have committed mistakes out of greed, for which they are punished. But that does not mean that everyone in Trinamool Congress is involved in unfair practices,” the chief minister said.