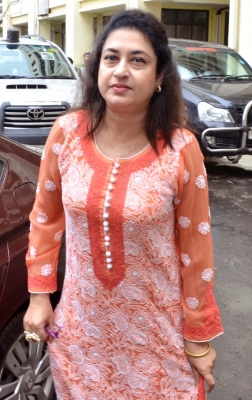 Kolkata: Trinamool Congress MP Satabdi Roy has been named as a witness in the fresh charge sheet filed by Central Bureau of Investigation (CBI) on September 7, in connection with the multi-crore cattle smuggling scam in West Bengal.

In the chargesheet, Anubrata Mondal, Trinamool Congress’s district president in Birbhum district has been mentioned for the first time as a prime beneficiary in the scam by the probe agency. There are a total of 95 witnesses named in the fresh charge sheet of CBI and 46th name on this count is that of Roy. Repeated attempts by IANS to contact Birbhum MP Satabdi Roy failed.

While one of her two mobile phones was switched off, repeated calls on the other went unanswered.

Besides the actress-turned-politician, the manager, assistant manager and staff of a public sector bank, where Anubrata Mondal and his family members used to hold accounts and fixed deposits have also been named as witnesses.

In the fresh charge sheet, the CBI has mentioned fixed deposits worth Rs 18 crore in the names of Mondal, his daughter Sukanya Mondal, his deceased wife Late Chobi Mondal and some of his close family relations. Besides the fixed deposits, the charge sheet also has references of details of some other savings bank accounts as well as 53 other documents related to moveable property of the Mondal family.

Since the arrest of Anubrata Mondal by the CBI sleuths in connection with the cattle smuggling scam on August 11, Satabdi Roy had been vocal in expressing her solidarity towards the party’s Birbhum district president. She said that since there are many people who received the help and cooperation of Mondal on this count it is the duty of everyone to express solidarity towards him in this moment of crisis. Mondal is currently in judicial custody at the Asansol Special Correctional Home in West Burdwan district in West Bengal.