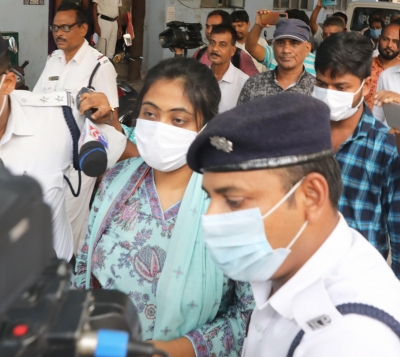 Kolkata: The Enforcement Directorate (ED) has summoned Sukanya Mondal, the daughter of Trinamool Congress strongman and the party’s Birbhum district president, Anubrata Mondal to Delhi to question her in connection with the multi-crore cattle smuggling scam, an official said on Saturday.

Sukanya Mondal has been asked to be present in Delhi’s ED headquarters on October 27.

However, it could not be yet known if she would be going to Delhi and appear for questioning.

ED sources said that they want to especially question her on the companies wherein she is the director as well as the rice mills in which she is the “partner”.

Already, two companies, namely ANM Agrochem Private Limited and Neer Developer Private Limited are under the scanner of both ED and Central Bureau of Investigation (CBI) that are conducting a parallel probe into the cattle smuggling scam.

In both the firms, Sukanya Mondal is one of the two directors and the central agency sleuths believe that these two corporate entities are basically shell companies meant for channelising the crime proceeds.

“We also want to question her on certain properties which were registered under her name, and were purchased at prices much lower than the prevailing market rates only to be sold off later at much higher prices,” an ED official said.

CBI sleuths had earlier questioned Sukanya Mondal in this connection.

However, during the questioning, she had claimed “total ignorance” and said such matters were mainly dealt with by her father’s personal accountant, Manish Kothari.

During the questioning, she also appeared clueless about the fixed deposits in her name.

India will work to promote universal sense of oneness as G20...