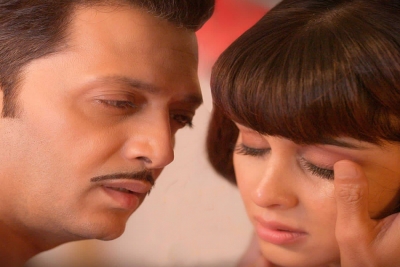 Mumbai: Ahead of the release of the celebrity couple Riteish and Genelia Deshmukh’s ‘Mister Mummy’, the makers of the film released its first song ‘Chupke Chupke’ on Wednesday.

Although the makers claim that the song has been composed by Rochak Kohli, it sounds every bit of a remake, albiet quite a diluted version, of legendary Pakistani ghazal singer Ghulam Ali’s ‘Chupke Chupke Raat Din’.

The music video of the song has been tastefully shot with a good architectural setting and an impressive colour palette. It features Armaan Malik and Shilpa Rao, and has been penned by Kumaar.

It is a melancholic song that captures the rollercoaster of emotions, touching moments, love and challenges faced by Riteish and Genelia’s characters in the film which is a comedy drama.

Riteish and Genelia, who often entertain their fans through their Instagram reels, promise to bring a rib-tickling comedy with ‘Mister Mummy’. The film has been shot extensively in England, and the story revolves around a couple with opposing choices when it comes to children.

Presented by T-Series, produced by Hectic Cinema Pvt Ltd Production and Bound Script Pictures, ‘Mister Mummy’ has been directed by Shaad Ali. The film arrives in cinemas on November 11.