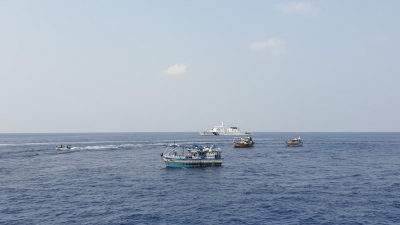 Mumbai: In a major intelligence-based swoop, the Indian Coast Guard (ICG) on Thursday said it has seized narcotics valued over Rs 3,000 crore and weapons from a Sri Lankan boat, off the Minicoy Isle in the Lakshadweep Islands region.

The ICG received an intelligence input on March 15 regarding a suspicious foreign boat likely to be engaged in drug trafficking in the high seas near the Lakshadweep Islands.

Following this and after verification, the ICG swiftly launched a coordinated air-sea operation to track the suspicious vessels in the Arabian Sea.

After intensive maritime and aerial searches of the regions, on March 18, the patrol units finally espied three suspicious boats off the Minicoy Isles and intercepted them.

Upon boarding the vessels and interrogating the crew, the ICG sleuths found their statements to be inconsistent, following which they searched the three vessels thoroughly.

The three boats, along with their 19-crew members, have been taken to Vizhinjam, Kerala, for further joint investigations.

This is the second major anti-drug trafficking operation by the ICG on the India’s west coast within a fortnight.

On March 5, ICG ships and aircraft had apprehended Sri Lankan boat ‘Akarsha Duwa’ with 6 crew in the same region off Minicoy Isles.

The crew had confessed to carrying 200 kg of high-grade heroin and 60 kg hashish which they jettisoned in the Arabian Sea upon sighting the ICG patrol ships.

Prior to these, in November 2020, the ICG had intercepted Sri Lankan vessel ‘Shenaya Duwa’ off Kanyakumari in the Indian Ocean with 120 kg narcotics valued at Rs 1,000 crore and five weapons.

“The past one year has proved to be a big setback for drug traffickers at sea as ICG has successfully seized about 1.6 tons of narcotics valued at approximately Rs 4,900 crore. The total drug haul done by ICG since inception amounts to Rs 10,952 crore,” the spokesperson said.