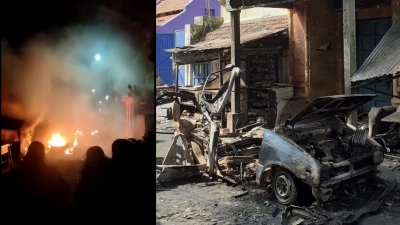 The National Investigation Agency (NIA) is conducting raids at several places across Tamil Nadu in connection with the Coimbatore car blast case.

Chennai: The National Investigation Agency (NIA) is conducting raids at several places across Tamil Nadu in connection with the Coimbatore car blast case.

Sources in the investigating team told IANS on Thursday that a person has been taken into custody here and interrogated.

He is being questioned on the background of the car which blasted on October 23 morning near the Sangameswarar temple, Ukkadam, Coimbatore. Six associates of Jameesha Mubin — the man who was killed in the blast –, have been arrested under the Unlawful Activities Prevention Act (UAPA).

Raids are underway at 33 places in Coimbatore and Chennai besides several other places across the state.

As per the sources, this is the biggest raid ever conducted by the premier agency in Tamil Nadu.

The Coimbatore car blast, on the eve of Deepavali, is considered a lone wolf attack and one of the arrested in the case, Firoze Ismail, was deported from UAE a couple of years before due to his contacts with the Islamic State(IS).

One of the accused in the case, Mohammed Thalka is the nephew of S.A. Basha, the dreaded Islamic terrorist and founder of Islamic terror organisation, Al Umma involved in the 1998 Coimbatore serial blasts in which 56 lives were lost and more than 200 people suffered grievous injuries.

The Coimbatore rural district police have already commenced a de-radicalization programme among the youths who were linked with some Islamic movements.