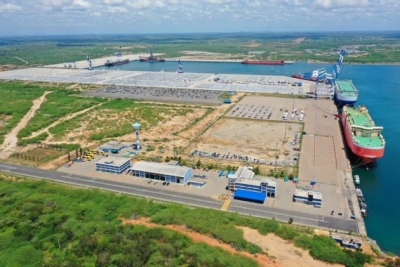 Colombo: The Colombo Port City and the Hambantota Port will attract foreign investments to Sri Lanka and boost growth in 2021, the governor of the Central Bank of Sri Lanka (CBSL) said.

“It is expected that the rapid development of the Colombo Port City Special Economic Zone, of which the commercial and retail asset components are set to break ground in mid-2021, would catalyse growth performance in the financial sector,” Lakshman said.

He said the CBSL would work with the government to operate a regulatory framework for the Colombo Port City Special Economic Zone which is expected to be introduced by an Act of Parliament later this year.

“Such joint work will ensure the seamless cohabitation of the national financial sector regulatory framework with the expected special legislation covering the international financial centre in the Port City,” he added.

The Colombo Port City or Colombo International Financial City (CIFC) is currently under construction on reclaimed land adjacent to the Galle Face Green in the Sri Lankan capital.

Meanwhile, the first phase of the Hambantota Port opened on November 18, 2010. The total cost of the projected is estimated to be $361 million, of which 85 per cent has been funded by the EXIM Bank of the People’s Republic of China.

In July 2018, it was announced that Sri Lanka would relocate its naval base at Galle to Hambantota.