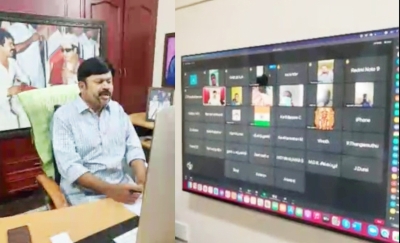 Chennai: Two former AIADMK leaders now aspiring to become the party’s general secretary are reaching out to party cadres and middle-level functionaries to drum up support through Zoom meetings and telephone calls.

Former MP and MLA K.C. Palanisamy is talking to a cross-section of party cadres via Zoom. His rival, V.K. Sasikala, long-time aide of the late chief minister and party supremo J. Jayalalithaa, meanwhile, has been dialling up local office-bearers.

Palanisamy is one of the few persons left in the party who have been active since the time of its founder, the late M.G. Ramachandran (MGR). An articulate speaker, he became an MP and MLA at a very young age when MGR was leading the party.

“I have held around 105 Zoom meetings with core members of the AIADMK,” Palanisamy said. “At each meeting, which would last for an hour and half, I would get to meet about 150 new participants, with about 80 expressing their willingness to speak initially, but not more than 30 actually speaking.”

Palanisamy said that till date, about 2,500-3,000 party cadres would have spoken at his Zoom meetings and about 2,000 of them would be new faces. “Care is taken to avoid participants and speakers being repeated,” Palanisamy added.

Personally targeting to reach about 10 lakh AIADMK cadres and earn their support by 2024, Palanisamy said that if the cadres are with him, then the middle-level leaders would extend their support to him.

At the Zoom meetings, Palanisamy insists that the party leader should be elected by the cadres and also shares his views on various developments while claiming the MGR legacy.

Palanisamy was the party’s spokesperson and belonged to the camp of the AIADMK coordinator (and former deputy chief minister) O. Panneerselvam (OPS) was expelled from the party in 2018 after he urged it to back a no-confidence motion against the BJP-led NDA government at the Centre if it did not take a stand favourable to the state on the Cauvery waters issue.

He was also the first person to oppose the election of Sasikala as AIADMK general secretary and also filed a case against the amendments made in the party’s bye-laws.

Palanisamy is a known face among party cadres across the state because of his regular appearance in major television channel debates, where he voices his views without any ambiguity.

He continues to maintain that the AIADMK should get out of its alliance with the BJP if it wants to remain a major political force in Tamil Nadu. “It was Sasikala who went soft on the BJP,” he points out.

Unlike Palanisamy, Sasikala carries out her politics using her mobile phone. After announcing her decision to keep away from politics ahead of the Assembly elections, she started making calls to middle-level AIADMK leaders.

Sasikala maintained a strong grip over the party when Jayalalithaa was around. After her mentor’s death, the reins of the party reins were with Sasikala and she was about to become the chief minister when Panneerselvam raised the banner of revolt.

The Supreme Court, meanwhile, upheld the trial court’s order holding Sasikala and her relatives guilty in a corruption case in 2017 and she spent the next four years in jail.

During this time Palanisami mended his ties with Panneerselvam and they both turned against Sasikala.

As she resumes her campaign for the top party position, Sasikala has been calling up about 50 AIADMK office-bearers daily and some of the call recordings are sent to the media. It is said that she also receives about 100 letters a day from AIADMK members.

Sasikala now plans to tour the state and meet AIADMK officials in person once the Covid-19 restrictions are eased.

Palanisamy’s Zoom meetings are interactive, but the telecons of Sasikala are mostly with party office-bearers who plead with her to stage a comeback and take control of the AIADMK, and she assuring them that she would soon do that.

Perturbed over her calls to party office-bearers and sharing the call recordings with the media, the AIADMK leadership has dismissed several party members for speaking to Sasikala.

No action, however, has been taken against the party members attending Palanisamy’s Zoom meetings.

Be that as it may, the communication wars between the two former stars of the AIADMK are all set to continue.