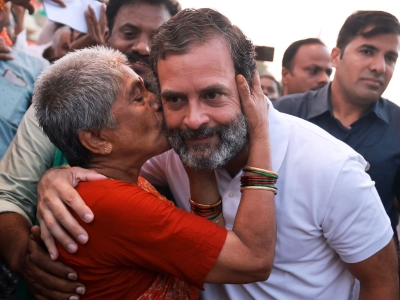 Kurnool (Andhra Pradesh): Congress leader Rahul Gandhi on Friday completed Andhra Pradesh leg of his ‘Bharat Jodo Yatra’ with the reiteration that his party remains committed to grant special category status to the state and develop a single capital at Amaravati.

On the fourth and final day of the Yatra in the state, Rahul Gandhi along with party leaders and scores of party workers resumed the Yatra Friday morning from Mantralayam in Kurnool district.

After a four-hour walk, the Yatra re-entered neighbouring Karnataka. It halted at Gillesugur in Raichur district. It will resume in the evening from Kerebudur village.

Rahul Gandhi thanked the people of Andhra Pradesh for their overwhelming support and encouragement. It has truly been a memorable experience, he said.

Opposing the Centre’s move to privatise Visakhapatnam Steel Plant, the Congress MP said his party supports the continued public sector statue of the plant as an asset of the Indian people.

In a statement issued at the end of the journey in Andhra Pradesh, he recalled the commitment made in and by the Parliament to the people of Andhra Pradesh. “We are determined to ensure that these commitments are met -fully and speedily. Both the central and state governments have failed in this regard,” he said.

Rahul believes that the Bharat Jodo Yatra will serve as a first step forward in this journey. “The Yatra has given us an unique opportunity to listen to people’s voices and gain an in-depth understanding of the daily challenges of the people of our great nation. There is a continuing effort on a daily basis to pit Indians against each other on the lines of caste, religion, language, food and dress. The unparalleled economic distress caused by skyrocketing prices and record unemployment, as well as the increasing concentration of political and economic power in a few hands are all matters of grave concern,” he said

He alleged that the state government systematically undermined the Panchayati Raj system in the state. He said the Congress party strongly opposed this assault on the democratic institutions. “We will also continue to amplify the voices of farmers, youth, women, workers and many other stakeholders whom we interacted with over the last three days.”