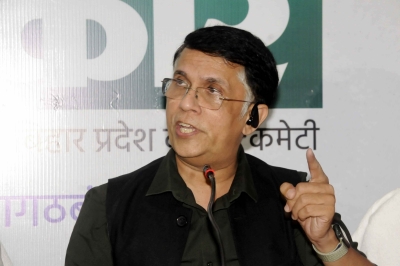 New Delhi: The Congress has demanded a CBI inquiry into the distribution of Pusa Bio-Decomposer, a microbial spray, developed by the Microbiology Division of Delhi’s Indian Agriculture Research Institute (IARI), to end paddy residue burning, which was allegedly contributing to the air pollution in the Capital.

The Congress also alleged that the real cause of the pollution in the Capital was traffic, dust from demolition and construction sites and waste burning.

Addressing a press conference, party spokesperson Pawan Khera said when the Congress was in power in Delhi for 15 years, it never used the word ‘parali’ burning (farm residue), but for the past seven years, ever since the Arvind Kejriwal-led AAP Government came to power, it has always been attributing ‘parali’ burning as the main contributor to the pollution.”

Khera said that CM Arvind Kejriwal launched the bio-decomposer, developed by ICMR, with much fanfare, and spent over Rs 10 crore for advertisements and over Rs 23 lakh for its distribution to 310 farmers, Rs 22.84 for tractors and tent, Rs 40,000 for purchase of bio-decomposer.

He said that according to information accessed through RTI, though over 1,200 farmers had registered for the bio-decomposer, only 310 farmers from 39 villages in Delhi were given the decomposer capsules, on the premise that four decomposer capsules are required per hectare, and accordingly, 3,200 capsules were required for 800 hectares of paddy cultivation in the villages of Delhi.

The Congress said according to an RTI reply, 8,000 capsules were purchased, which now raises a big question that why did the AAP government purchased around 4,800 capsules more than the required number.

He said that instead of four capsules, 10 were used to decompose the paddy residue, to mislead the farmers, and the report of the 15-member committee constituted by the Kejriwal government points to a major scam, which should be probed by the CBI.

Pawan Khera disclosed that when an RTI application was filed for seeking details of the expenses incurred for the publicity of distributing bio-decomposer to 310 farmers from the Chief Minister’s office, no satisfactory reply was given, though CM Arvind Kejriwal had been a major champion of RTI before coming to power in Delhi through lies and falsehood.

He said that when village-wise benefit of this scheme was demanded through RTI, it was not given either, which clearly indicates that large scale corruption had taken place in the distribution and use of the bio-decomposer, which the Kejriwal government is chary of disclosing.

The Congress alleged that Delhi government has betrayed the farmers by notifying one of the three black agricultural laws — the Farmers’ Produce and Commerce (Promotion and Facilitation) Ordinance, 2020 on November 23 at a special session of the Delhi Assembly — and is “examining” the other two controversial laws, passed by the Modi government.