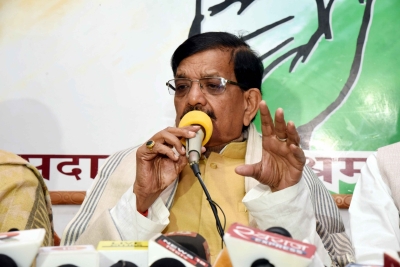 Patna: A day after the opposition leaders were allegedly assaulted by the Patna police in the Bihar Legislative Assembly, Congress leaders led by Madan Mohan Jha arrived in the Assembly on Wednesday with black bands on their eyes.

The Congress leaders said that the Patna police had beaten up the opposition leaders on the direction of Chief Minister Nitish Kumar, an act which is similar to that of Adolf Hitler.

“Such an incident couldn’t have taken place without Nitish Kumar’s permission. He directed the police to abuse and assault public representatives of opposition parties. The Patna police have crossed all limits,” Jha added.

Congress MLA from Bhagalpur, Ajeet Sharma, said, “The Patna police attacked the temple of democracy. They misbehaved with women legislators and dragged them out of the state Assembly building. We are protesting to safeguard our democratic rights. If we are not safe here, then who else is safe in Bihar?”

The opposition leaders boycotted the state Assembly on Wednesday and did not enter the House while Rashtriya Janata Dal leaders organised a parallel House proceeding in the lawn of state Assembly premises.

They elected party leader Bhudeo Chaudhary as the Speaker of the House and urged him to save the democratic rights of the legislators. The also requested the ‘Speaker’ to work in the interest of common people and listen to every public representative of both the ruling and opposition parties.

“We have condemned the act of the police in our parallel Assembly and requested the ‘Speaker’ to ensure that such incidents are not repeated in the future,” said Bhai Virendra, senior RJD leader and MLA from the Maner constituency.