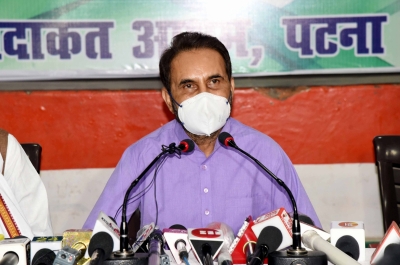 Congress’ Gohil wants to be relieved from Bihar charge

New Delhi: Congress Bihar in charge Shaktisinh Gohil on Monday said that he wants to be relieved of the responsibility on personal grounds.

Gohil, who got infected by Covid, said he wants a lighter role in the party.

“Due to personal reasons, I have requested our party high command to allocate me lighter work for next few months and to relieve me ASAP as Bihar in charge,” said Gohil, who is also the current in charge for Delhi.

In the recent Bihar Assembly elections, the party was routed in polls and the alliance partner RJD attacked it for the poor show. The Congress, which managed to win just 19 out of the 70 seats it contested, had been the weakest link in the Mahagathbandhan with the lowest strike rate in the alliance.

The matter was raised during party chief’s Sonia Gandhi meet with senior leaders on December 19 and some leaders from Bihar wanted Gohil to be held accountable for conceding good seats to partners and getting harder seats to contest.

After the elections, Congress General Secretary Tariq Anwar had said: “We should accept the truth that due to the weak show by the party, the Grand Alliance could not form the government in Bihar. Congress should introspect what went wrong. Also, the entry of AIMIM (All India Majlis-e-Ittehadul Muslimeen) in Bihar is not a good sign.”

Some Congress leaders in Bihar had complained Gohil and screening committee chairman Avinash Pandey had not listened to the state leaders.