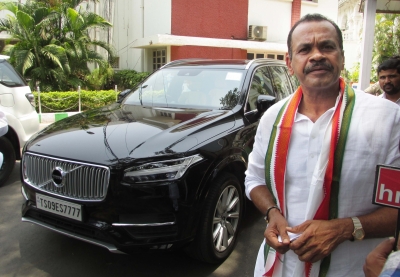 Hyderabad: The Congress on Sunday issued show cause notice to its Telangana MP Komatireddy Venkat Reddy for his recent utterances.

Congress General Secretary Tariq Anwar issued the notice to the MP from Bhongir a day after video clip went viral in which he is heard predicting that the Congress will lose the by-election to the Munugode Assembly seat.

Venkat Reddy, who is the star campaigner of the Congress, went on to predict that his brother and BJP candidate Komatireddy Rajagopal Reddy will win the November 3 bypoll.

The party leadership has asked the MP why no action should be taken against him under the party constitution for indiscipline. He has been asked to submit a reply within 10 days.

His statements caused huge embarrassment to the Congress a day before the entry of party leader Rahul Gandhi’s ‘Bharat Jodo Yatra’ in the state.

Hours after the Yatra entered Telangana and Rahul Gandhi left for New Delhi for three-day break, the central leadership issued the notice.

A video of Venkat Reddy’s interaction with some people went viral on social media on Saturday even as the party leaders were engaged in hectic campaigning in Munugode.

Earlier, an audio clip of Venkat Reddy went viral in which he is heard urging local Congress leaders to support his brother.

Venkat Reddy’s brother Rajagopal Reddy had resigned as MLA and also quit the Congress to join the BJP, which fielded him as its candidate in the by-election.

There have been speculations in recent weeks that Venkat Reddy will also follow his brother and switch loyalties to the BJP.

The audio and video of the MP have surfaced days after he made it clear that he will not campaign in Munugode where Congress has fielded Palvai Sravanthi as its candidate.