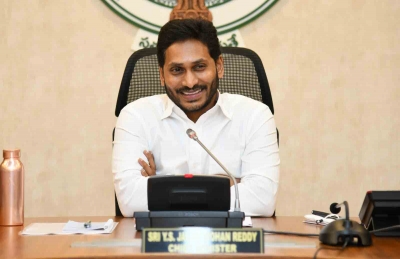 Amaravati: After a series of temple attacks in Andhra Pradesh, the state’s YSR Congress government on Monday alleged an ongoing conspiracy by political opponents to defame and brand it “anti-Hindu”.

Chief Minister Y.S. Jagan Mohan Reddy on Monday cited a pattern in these attacks, noting that they were occurring around the time when some prestigious welfare programmes were being launched.

He deplored that the politics rivals were not even sparing God to reap dividends.

Reddy gave examples of nine temple attacks in the southern state which synced with some mega welfare schemes.

He said on November 14, 2019 when the Nadu-Nedu scheme aimed at transforming government schools on par with corporate schools was launched, reports of a temple being desecrated in Guntur emerged.

“Going to some far off deserted place or village, sometime in the midnight, they go to a small temple and break idols and the next day they publicise it on the social media and the opposition leaders go there to politicise while the yellow media exaggerates it,” he said.

The CM said within a week of setting up a price stabilisation fund worth Rs 3,000 crore on January 15, 2020, reports on some idols being broken in Pithapuram had emerged.

A few days later on February 11, 2020 another incident was reported from Rompicherla when the government inaugurated Disha police station for women.

Likewise, on September 5, 2020, a decades old chariot belonging to the Antarvedi Sri Lakshmi Narasimha Swamy temple got gutted, around the time the government launched a scheme to supply nutritious food.

Adding a few more examples, the Chief Minister alleged that media houses aligned to opposition parties are drumming up these incidents to divert public attention on the welfare schemes in a bid to communally tarnish the party which captured power for the first time, almost 10 years after its launch.

He suggested that the police think why such activities are occurring, who is behind them and who is targeting whom.

Reddy observed that people are living amidst in an era when lies are peddled through the social media.

Most of the time, these crimes would first go viral on social media, followed by the mainstream media reporting them, he said.

“The society has deteriorated to such an extent that nobody fears or respects God. For the sake of politics, even God is not being spared. God is also being brought to politics and with God politics, some people are aiming to benefit and we are going to the climax of kalyug,” he alleged.

Likening these attacks to “guerrilla warfare tactics”, Reddy attacked Telugu Desam Party President N. Chandrababu Naidu for “making all efforts to spin these incidents into political and religion issues in a state not known for religious divide”.

Devulapalli Amar, national media and inter-state affairs advisor to AP government said one or two incidents of temple attacks could be termed as stray incidents but regular attacks point at a definite conspiracy.

He said Reddy took up the attacks very seriously and an additional DGP rank officer was appointed to review all these incidents and bring the conspirators to book.