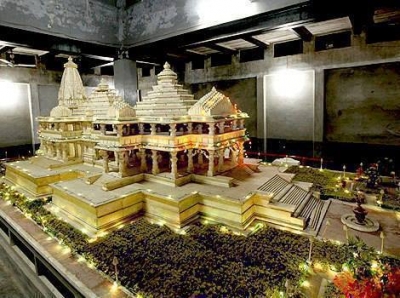 Bengaluru:  The Rashtriya Swaymasewak Sangh’s (RSS) highest decision-making body, the Akhil Bharatiya Pratinidhi Sabha (ABPS), on Saturday passed a unanimous resolution saying that the construction of the Shri Ram mandir is manifestation of the innate strength of Bharat.

The resolution added that this programme has became the unique symbol of spiritual awakening, national integration, social harmony, goodwill and dedication.

“Construction of Ram Mandir programme is the intrinsic strength of Bharat has been invigorated and this programme has become a unique symbol of spiritual awakening, national integration, social harmony, goodwill and dedication,” the resolution explained.

The resolution added that along with the construction of the grand mandir at the Shri Ram Janmbhoomi in Ayodhya, the social and national life inspired by the values of Shri Ram will be established through collective resolve and efforts.

“This will pave the way for building a strong and glorious Bharat which in turn will ensure the well-being of the whole world,” the resolution claimed.

The ABPS also appealed to all ‘Ram bhakts’ including social and religious institutions, educationists and intellectuals of the country to make meaningful efforts so that Shri Ram’s ideals permeate through the society.

While the ABPS expressed its gratitude towards all ‘Rambhakts’ for showing unparalleled enthusiasm and support for the construction of Mandir at Shri Rama Janmbhoomi in Ayodhya.

“The 44-day-long “Nidhi Samparn Abhiyan” (Temple Construction Funds drive) has indeed been the biggest outreach campaign in the history of the world,” the resolution stated.

According to the resolution, over 12 crore ‘Rambhakt families’ from about 5.5 lakh cities and villages have contributed to the construction of the grand temple. All the sections and sects of the society overwhelmingly participated in this campaign.

“People from rural, urban to forest and hilly areas, from rich to ordinary people contributed wholeheartedly to make this campaign a success. The ABPS congratulates ‘all Rambhakts’ for this unparalleled enthusiasm and support,” the ABPS said in its resolution.

The resolution added that this campaign had once again proved that the entire country is always connected emotively with Shri Ram.