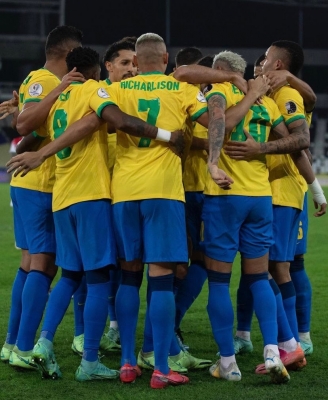 Copa America final: A new chapter in an old rivalry
Rio de Janeiro:  As much as both managers tried not to discuss it, the recent tournament history of Copa America finalists Brazil and Argentina is a study in contrast.

Argentina will be aiming to win their first major title since the 1993 Copa America when they battle for glory at Rio de Janeiro’s Maracana stadium on Sunday morning (IST).

Since that time, Brazil have stood on the Copa America champions’ podium five times and won the World Cup twice, reports Xinhua.

“That is history. Looking at the past is not a reference,” Brazil head coach Tite told a virtual news conference on Friday. “We are undefeated in the last two Copa Americas and we have better numbers but I don’t see that having much importance.”

Likewise, Argentina boss Lionel Scaloni preferred to avoid answering questions about Argentina’s trophy drought and denied that his players were under pressure to end it.

“We have to take it easy and with caution,” Scaloni said. “We have to do everything possible to win, without any anxiety. This pandemic has shown that football is important but not that important.”

The duel will not only pit what are clearly South America’s two best teams against each other, but also the two best players.

Brazil idol Neymar has lived up to expectations by scoring twice and providing three assists in a free-roaming attacking midfield role.

Lionel Messi has been even more devastating for Argentina, leading the competition for both goals (four) and assists (five).

The six-time Ballon d’Or winner has made no secret of his desire to end Argentina’s major tournament heartache and he has looked a man on a mission here.

Teammate Rodrigo De Paul gave an insight into how Messi is revered by his peers after the team’s quarterfinal victory over Ecuador when he described the 34-year-old as being “one step ahead of all of us”.

While many opposing sides have resorted to assigning two or even three players to mark Messi during the competition, Tite appeared to rule out a master plan to counter the talisman.

The showdown will provide a chance for Argentina to atone for their 2-0 defeat to Brazil in the semifinals of the 2019 Copa America, which was also played in Brazil.

Not that Scaloni seemed to care. The 43-year-old said his top priority was to help ensure the quality of the spectacle by keeping his players in a positive frame of mind.

“Tomorrow is a final and we have to play it as if it were in Buenos Aires, Santiago de Chile or Barranquilla,” the former wing-back said. “In addition, Brazil are playing at home, at a mythical stadium. The football world will come to a standstill,” he added.