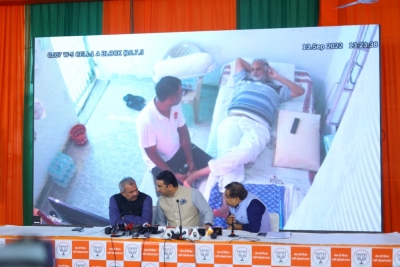 In a latest development in connection with the Satyendar Jain Tihar masaage matter, the Rouse Avenue Court on Saturday issued a notice to the Enforcement Directorate (ED) for allegedly leaking CCTV footage of Tihar Jail.

New Delhi: In a latest development in connection with the Satyendar Jain Tihar masaage matter, the Rouse Avenue Court on Saturday issued a notice to the Enforcement Directorate (ED) for allegedly leaking CCTV footage of Tihar Jail.

Now, the ED will have to tell court as to how the media firms got the leaked footages of Tihar Jail.

The counsel appearing for Jain has alleged that it was ED who leaked the footage. An undertaking was given in the court by the ED to protect the footage which has now been leaked.

The court also asked the probe agency who leaked the footages.

Special Judge Vikas Dhull then issued a notice to the ED. The court has now fixed the matter for November 21.

What is the case:

The ED initiated money laundering investigation on the basis of the CBI’s FIR lodged against various suspects including Udai Shanker Awasthi, MD IFFCO, Pankaj Jain, Promoter of Jyoti Trading Corporation and Rare Earth Group, Dubai, Amarendra Dhari Singh and others. Satyendar Jain was also made an accused in the matter.

They were accused by the CBI of allegedly hatching criminal conspiracy, cheating and criminal misconduct.

The ED learnt in the investigation that Awasthi and others in IFFCO generated proceeds of crime (PoC) and layered it through various unrelated entities and part of PoC was then transferred to the entities controlled by them.

The allegations include receipt of illegal commission by the accused from the overseas suppliers through a complex web of fake commercial transactions through multiple entities registered outside India (controlled by the accused persons) to camouflage the fraudulent transactions as genuine.

“Awasthi (father of Amol Awasthi & Anupam Awasthi) and Parvinder Singh Gahlaut (father of Vivek Gahlaut) wield considerable influence in the Fertilizer industry by virtue of their position as Managing Director of IFFCO & Director of IPL (U.S. Awasthi) and Managing Director of IPL (Parvinder Singh Gahlaut). Such payment of commission to them through their sons bleed the coffers of IFFCO & IPL and is a fraud upon the shareholders of IFFCO & IPL which consists of many State Marketing Federations wherein stakes are held by various State Governments,” the ED said.

ED also learnt during the investigation that an amount of Rs 37.12 crore plus USD 6.18 million was received by Sanjay Jain in India through illicit means.

Earlier, Enforcement Directorate had arrested Jain’s business partner A.D. Singh and Alok Kumar Agarwal with whom he had business relations. A.D. Singh had also received Rs 27.79 crore from Dubai through illicit means. Both Jain and Singh have used the vehicle provided by Agarwal to receive the proceeds of crime in India.

The ED had also filed a prosecution complaint before a Special Court in 2021 against six accused.