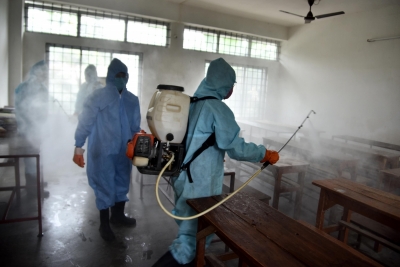 Guwhati/Agartala: Bearing a resemblance to the entire world, at least 2,191 people died of Covid-19 in northeast in the past year, the region which usually remains distressed with terrorism and backwardness.

While the decades-old terrorism and economic backwardness have already battered the eight states of the region in the erstwhile years, the coronavirus pandemic in 2020 took a toll on the lives and economy of the northeastern region, which has a population of 45.58 million, with 28 per cent of tribal population.

According to the Union Health and Family Welfare Ministry’s fact sheet, among all the states across the country, Mizoram has the distinction of lowest death ratio in Covid-19 with 0.19 per cent, while Sikkim had the maximum fatality rate of 2.16 per cent among the northeastern states.

However, the average death rate of the northeastern region due to the coronavirus is 0.91 per cent against the national average of 1.45 per cent.

Three other northeastern states — Manipur (1.26 per cent), Tripura (1.16 per cent) and Meghalaya (1.04 per cent) have high mortality ratio in coronavirus, while Arunachal Pradesh (0.34 per cent), Assam (0.48 per cent) and Nagaland (0.66 per cent) tamed the death ratio reasonably.

Union DoNER (Development of North Eastern Region) Minister Jitendra Singh on a number of occasions lauded the Covid-19 management of the northeastern states, while Union Home Minister Amit Shah during his recent visit to the two northeastern states — Assam and Manipur– highly praised Assam for the lowest mortality rate.

The first death reported due to the coronavirus in Assam on April 10, also the first in the northeastern region, was in the Hailakandi district on the southern part of the state.

A middle aged man, who had visited abroad, succumbed to Covid-19 in the Silchar Medical College and Hospital. There is a good news too. All those people who have recently arrived from the United Kingdom (UK) to Assam, Tripura and Meghalaya, tested negative for the coronavirus.

After Gujarat, Kerala and a few other states, the Tripura government has distributed homeopathic drug Arsenicum Album-30 free of cost among 50,000 families residing in the Agartala Municipal Corporation to boost the immunity of the people against coronavirus.

The Tripura government distributed vitamin-C-enriched pineapple and lemon juice freely in July among the people in urban areas to increase their immunity against Covid-19. Besides, Covid-19, several other issues dominated the northeastern region including the new Citizenship (Amendment Act), National Register of Citizens (mainly in Assam), promulgation of Inner Line Permit to protect the indigenous people of the region, flood and landslides in Assan and other northeastern states.

In an industrial disaster, six months long gas and oil condensate leakage and subsequent fire at an oil well of the state-owned Oil India Ltd’s (OIL) in Assam’s Tinsukia district was also a major incident in the region. After nearly six months, state-owned Oil India Ltd’s (OIL) blowout well in Assam’s Tinsukia district has been successfully “killed” and the 160-day-long fire there was doused completely on November 15, officials said.

The BJP-led governments in Manipur and Tripura faced rebellion in the just departed year, while separate Naga flag, separate Constitution demands by the Isak-Muivah faction of the National Socialist Council of Nagaland (NSCN-IM) hindered the 23-year long peace talks with the Indian government in 2020.