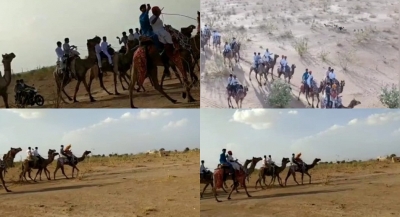 Jaipur: At a time when Rajasthans camel population has been seeing a steady and precipitous decline, the Covid-19 pandemic seems to have given a new lease of life to the ship of the desert.

With wedding parties unable to use regular modes of transport because of social distancing norms, camels are back in demand to move grooms and their families to the villages of the brides.

Camels have also emerged as the saviours of schools in remote villages that are not connected by roads or do not have the luxury of internet connectivity. These animals transport teachers to such schools and even reach study material and stationery to students in far-flung areas.

Unfailingly coming to man’s rescue, the camels, though, are in dire need of help. Their population has been declining at a steady pace in the last many years. The Rajasthan government’s 20th livestock census reveals that the number of camels in the state has dropped from 3,25,713 in 2012 to 2,12,739 in 2019.

Rajasthan, incidentally, has the largest population of camels in the country. A big question mark, though, hangs over the prospects of their survival.

Hanwant Singh Rathore, Director of the Lokhit Pashu Palak Sansthan, speaking to IANS said: “There are many villages near Bikaner where there used to be 500 camels a few years ago. Today, there isn’t even a single camel around.”

Listing the reasons for the decline in the camel population, Rathore said people no longer have the incentive to keep camels.

“The young are not interested in caring for these animals as they see no profit in it. And with villagers opting for newer modes of transport such as cars and jeeps, camels no longer have any utility.”

The pandemic therefore has come as a blessing for camels. They are back in business, ferrying baraatis during the wedding season. What became a necessity because of social distancing rules, in fact, is now seen as the new style statement for wedding parties.

These camels are dolled up with nose pins, ghungroos, mirror-fitted garments and other baubles, making people wonder why they should not become a permanent feature of wedding celebrations.

As Anand Singh, a member of a wedding party put it: “What can be a more unique way of arriving at a wedding than on the back of a beautifully decorated camel?”

He was travelling with the groom on a camel from Bandeva village in Pokhran to Kusumbla village in Barmer.

Chaturbhuj Singh of Rajputana Cabs, who organises camel safaris at different locations in Rajasthan, put the change in perspective when he said: “The once famous practice of ‘Lawazma’, whereby camels and elephants were used by the erstwhile royals for their wedding processions, has come back in these pandemic times.

“In the coming days, this theme will be much in demand. As the state opens up completely, our foreign guests would love to tie the knot with a wedding procession on the lines of a ‘Lawazma’. European tourists, anyway, are in love with the ship of the desert.”

The new trend will surely give tourism a much-needed booster dose. And also keep students connected with the world of learning. The pandemic may just make Rajasthan see the animal that has been synonymous with the state in an altogether new light.