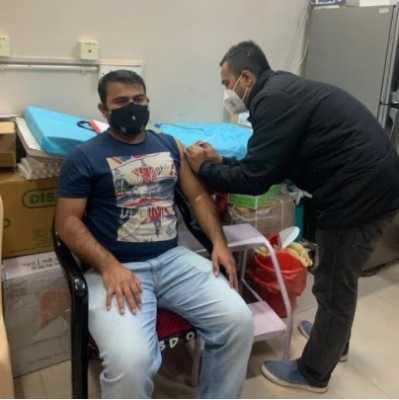 Covid vaccine: A volunteer who took the trial shot shares his experience

New Delhi: When 29-year-old Afzal Alam along with a few friends reached the All India Institute of Medical Sciences (AIIMS) DOTS Centre on December 30, 2002, as a volunteer to participate in the clinical trial of the indigenously manufactured Bharat Biotechs Covaxin, his parents back home in Motihari in Bihar had no knowledge of this. Alam has been regularly donating blood at AIIMS. “Since I have been a blood donor for many years at AIIMs, I know a few doctors and when they brought up the issue of trials, I did not hesitate to take the jab as part of the clinical trial process,” Alam said.

“I was keen to be part of this process and contribute to society, especially after so many people have died due to coronavirus,” he told IndiaNarrative.com.

“There have been deaths due to Covid 19, people have lost jobs and livelihoods, I wanted to make a difference and support the clinical trial run, we need to put an end to this so that jobs are back and we can live normal life,” Alam said.

“When we reached AIIMS DOTS centre for the trials, we were made to feel very comfortable by the doctors,” he recalls.

On arrival at the centre, Alam’s weight and height were measured.

“We were made to sit and all our questions were patiently answered by the doctors, there was no hurry. In fact, there was no forcing us for volunteering for the trials also and the choice was still open to me to turn back,” he said.

“We were also told that financial support to the nominees would be provided in case of any disability or death,” Alam added.

Alam, however, said that he never thought of turning back. “I was there and was determined to take the shot, there was no tension or fear and that is perhaps because of my overall association with AIIMs,” the volunteer noted.

The doctors conducted an RTPC test on Alam after which the Covaxin shot was administered.

Alam and the other volunteers, who got the jabs, were discharged after being under observation for about 30-odd minutes.

Despite the shot, the volunteers are mandated to continue following the normal Covid-19 protocol which includes social distancing, wearing of the mask and washing hands.

“We have to continue with the Covid-19 protocol despite the vaccine and also the doctors have asked us to immediately report in case of any discomfort,” he said.

Alam’s next shot is due on January 27. He has been asked not to donate blood for three months. For other volunteers, family planning too is restricted for six months.