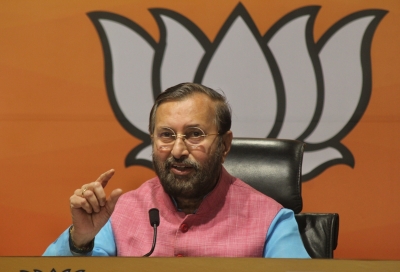 Amidst the protest by BJP and Congress outside the Thiruvananthapuram (TVM) Corporation in Kerala seeking resignation of the Mayor Arya Rajendran for allgedly trying to give jobs for 295 CPI-M activists, senior BJP leader Prakash Javadekar described this a ‘recruitment scam’ by the CPI-M.

Thiruvananthapuram: Amidst the protest by BJP and Congress outside the Thiruvananthapuram (TVM) Corporation in Kerala seeking resignation of the Mayor Arya Rajendran for allgedly trying to give jobs for 295 CPI-M activists, senior BJP leader Prakash Javadekar described this a ‘recruitment scam’ by the CPI-M.

A letter purportedly sent by the Mayor to CPI-M district secretary Anavoor Nagappan seeking a ‘priority list’ of candidates for contractual appointments in the corporation had surfaced recently, which led to the present political impasse.

“This was a clear case of recruitment scam by the ruling CPI-M… Honest, hard working youth will not get a job as it is only for CPI-M and they are engaged in corruption… A real probe should happen and we will be fully supporting you (the state BJP cadres),” said the former Union Minister and the national in-charge of the Kerala BJP unit.

Rajya Sabha MP Javadekar arrived to meet the party supporters who are up in arms and stay put before the Corporation office for the past five days. The BJP leader on the occasion strongly condemned the police actions against the protesting BJP cadres.

The police fired tear gas shells and used water canons to chase away the protesters which includes the Congress led UDF workers also, who are all demanding the resignation of the country’s youngest lady Mayor over the corruption charges.

Meanwhile, Rajendran told the media that resigning is out of question as she continues to enjoy the full support of her councillors and also the Chief Minister Pinarayi Vijayan.

“The opposition have their right to protest, but I am not going to resign as I have the full support of my councillors. We are ready for any probe and we appreciate the Kerala High Court asking me for my version. We will also fully cooperate with the ongoing Crime Branch probe and are willing to hand over mobile phones if it helps the probe,” said Rajendran.

However, even as Rajendran says they (she and the party) are “willing to cooperate”, CPI-M councillors Nagappan and D.R. Anil, whose letter also has come out is yet to appear before the probe team, citing their busy schedule.

Meanwhile on Friday, a probe by the Vigilance department was also initiated by the Director, Vigilance after complaints were made before him about the “rampant nepotism prevailing in the Corporation”.